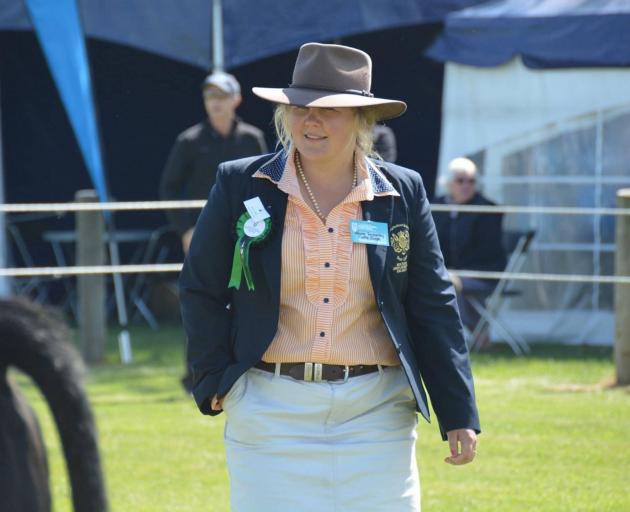 Marie FitzPatrick is looking forward to presiding over the Oxford A&P Show on Saturday. PHOTO: SUPPLIED BY MARIE FITZPATRICK
Running an Angus stud, raising a newborn child and preparing for an A&P show are all in a day's work for Marie FitzPatrick.

The 28-year-old is set become one of the youngest show presidents when she presides over the Oxford A&P Show on Saturday.

"Things do take a bit longer when you're a young mum and a farmer, but we are getting good at multitasking," Mrs FitzPatrick said.

Having an engineer husband at home to take care of the farm machinery certainly helped. Andrew FitzPatrick was raised on a sheep and beef farm at Fairlie.

"I have a very supportive husband who has been able to look after the farm, and the machinery is getting a lot better treated," she said.

"I can still do the stock work, but I can't quite fit it all in."

Baby Margaret will be barely eight weeks old on show day, but has already been present for scanning of stock when she was two weeks, weaning when she was aged four weeks, and was "out and about" at an on-farm heifer competition at six weeks of age.

Timperlea Angus has 120 stud cows and will host its third on-farm bull sale in October.

"It's very exciting. It's been very well supported and we've had some really good averages; and everyone seems to be pleased with our bulls."

"With the baby around, the dogs are getting a lot less attention than they normally do, so we needed the sheep to keep them busy."

Sisters Victoria and Hazel, and their respective partners Glen Trayner and Matt Clark, sharemilked for their parents, Clarence and Linda Timperley.

The Timperley family will be well represented in the hay and baleage classes, and the baking and jam classes, while Mrs FitzPatrick’s nieces will be competing in the highland dancing section, organised by Victoria Trayner.

"The hay and baleage competition is going to be hotly contested by our family to see who's going to win," Mrs FitzPatrick said.

"We're all going to the show, so Mum is on grandparent duty. Between us there's seven grandkids."

Mrs FitzPatrick is part of a youthful presidential team, with senior vice-president Letitia Schroeder (who would have been show president last year) and Steve Macauley both aged under 40.

The show is hosting the Royal Agricultural Societyyoung judges and paraders competitions, which were normally held at the Hawke’s Bay A&P Association’s Royal Show. It was cancelled because of Covid-19

Competitions begin on Friday morning with the beef judging at Angus breeder Andrew Stokes’ Oxford property, while fleece and sheep judging will take place at the Oxford showgrounds in the afternoon.

On show day there will be dairy cattle judging, along with the dairy and beef cattle paraders at work.