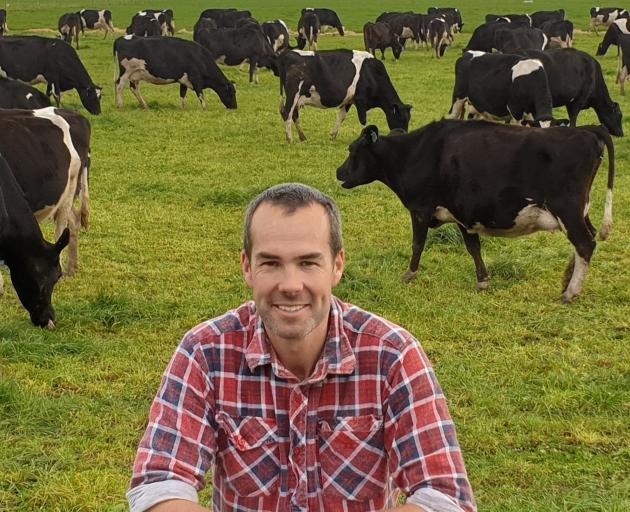 Cam Henderson has been appointed as an associate director on the DairyNZ board.PHOTO: DAIRYNZ
Cam Henderson is excited about some new projects "closer to home".

The Oxford farmer has already announced his intention to step down as Federated Farmers North Canterbury president at May’s annual meeting and has already filled the void.

Mr Henderson was recently appointed as one of two new associate directors on DairyNZ’s board of directors and has recently been made a trustee of the newly renamed Waimak Landcare Group.

He also planned to step down from his role as Waimakariri Zone Committee deputy chairman, Mr Henderson said.

"It’s more observing than taking on responsibility and it’s more on the research and development side rather than policy," Mr Henderson said of his new DairyNZ role

"It should allow me more time to step back and spend more time at home, which is the key."

Since being elected as Federated Farmers provincial president four years ago, Mr Henderson’s life has changed from being single to being "a family man", and his partner Sarah is expecting their second child in April.

"This is a unique chance to learn, as there aren’t many opportunities to get involved in professional boards like this," Mr Henderson said.

"There is a lot of expertise at the table, and I hope to contribute some of my own experience and perspective, to help shape discussions.

"Within my other industry roles, I have gained insight into many current issues and opportunities facing dairy farmers."

The Waimak Landcare Group started life as the Next Generation Farmers Group in 2018.

Last year the group received Ministry for Primary Industries sustainable food and fibre futures funding for a three-year project to investigate and trial environmental mitigation options through a "whole of farm" planning approach.

"It’s quite exciting to be involved in. It’s about helping farmers with options, through trials and story-telling on the land, and to help improve environmental footprints," Mr Henderson said.

"Hopefully, it will be the first of many helpful projects to support local farmers. It’s very much ‘watch this space’."

The group had the support of the New Zealand Landcare Trust and planned to host a "whole-of-catchment forum" later this year "to take stock of where we are at in the Waimakariri and how we can fill some of those gaps".

"There’s some pretty lofty plans, so I can’t guarantee all of them will come off," Mr Henderson said.

"But it’s about getting everybody together rather than everybody going and doing their own thing and duplicating resources."

The group was chaired by Sam Spencer-Bower, who, like him, was "in the same boat of running a large farming operation and having a young family".