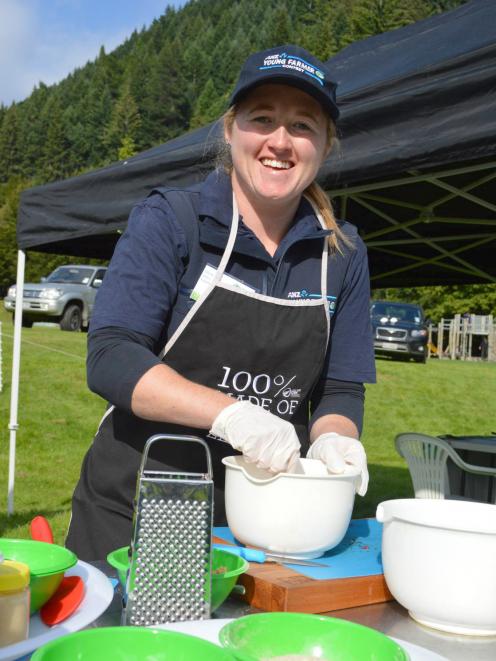 From raising pet lambs to seeing processing chains process the property’s lambs each year, her exposure to the industry was unlimited.

After leaving Takitimu Primary School in the rural township of Nightcaps, she headed to boarding school in Invercargill and that was when her association with, and understanding of, the urban population began.

In year 11, her family moved to the Taieri Plain and she transferred to secondary school in Dunedin, where she was one of the only pupils who came from a rural background and lived on a working farm.

Known for her humorous speeches, Miss Ross made the speech finals in her first year there with a speech entitled "Farming Through the Seasons".

"However, this time was different. They laughed the whole way through and even the teachers were throwing me funny glances.

"Why? Because they simply didn’t understand the farming practices I spoke about. I would take classmates home for weekends on the farm and [find] them not understanding why we drenched the sheep or that the meat that they got in the supermarket came from a farm originally," she said.

When she first went to school, she wanted to be a vet but teachers told her she was not academic enough — and she agreed with that.

So she looked at going to Lincoln University to follow her passion in agriculture and animals.

"They [her teachers] told me I could do better than to go farming ... They didn’t realise there was more to our sector than hands-on farming. Consequently, it’s been my passion to try and narrow the urban-rural divide and see school students better understand our industry."

Since graduating from Lincoln in 2009, she had farmed within the sheep and beef sector, while working in the fertiliser industry for five years then in her current position with Beef + Lamb NZ as its southern South Island extension manager.

She lives on a 700ha sheep and beef operation in Northern Southland, where her partner, William Weatherburn, is assistant manager, and she has had a big involvement with New Zealand Young Farmers and the TeenAg and AgriKids programmes.

Through her job, she liaised with a wide range of farmers and business professionals, both on and off farm, and observed there was a real shortage of younger people coming into the sector.All primary industry sectors had an ageing workforce and those people would need to be replaced by 2025.

Last year, Miss Ross took part in the Kellogg Rural Leadership programme, where she undertook a project  gauging the awareness of the red meat sector among secondary school pupils.

Her research looked into whether pupils’ awareness of careers in the red meat sector  was having an impact on the overall employment rate within the sector. She found more emphasis was needed on outlining career pathways in the sector.

There was also a need to  take advantage of the skill set of the next generation of primary sector workers. Also, the stigma associated with agriculture and practical occupations in general remained. It was necessary to educate teachers and create clearer career pathways through apprentice programmes. Pupils needed more exposure to the various primary industry sectors and one  of her recommendations was for industry collaboration to ensure representation of all sectors at school career days and information evenings.

She wanted to see  local and national field days —  such as the Southern Field Days at Waimumu and the National Field Days at Mystery Creek —  incorporate structured visits for pupils out of school hours  to increase their awareness of the  opportunities available.

"Many teachers have identified that they can’t fit more into the already busy weekly school timetable and this would allow it to happen outside schools’ normal working hours," she said.

Always up for a challenge, Miss Ross said she had "put everything" into the project.

"I didn’t have a life for six months, really."

She was grateful for the backing of both B+LNZ and New Zealand Young Farmers. While the project had been "huge", it had been well worth it.

She came up with some "really great stuff" that would hopefully be put into practice and was working how to do that at the moment. She had a great network and  was starting with those who had supported her with the project.

Now that the research  — which comprised a 65-page report — had been done, it needed to be used, she said.

She had received some good feedback already and it was exciting to be able to potentially make some headway. It all came down to "educating educators".