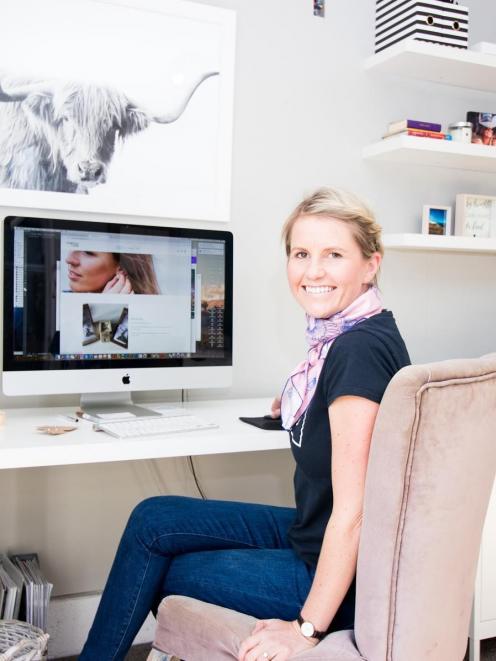 Mrs Hayman created the Whistle & Pop label two years ago, inspired by some of the sights and sounds she has experienced since moving to the valley.

Her pieces include a sterling silver shepherd's whistle worn as a necklace or earrings.

''I was thinking of practical accessories,'' Mrs Hayman said.

Familiar farming expressions such as ''Wallago'', ''Rattle ya dags'', ''Shut the front gate'' and ''That'll do'' feature on clothing.

And a jewellery collection uses ''brands'' - small silver ingots stamped with images of wheat, a sheepdog, stag, or pony.

''It's a way of expressing yourself through jewellery - a humane way of branding yourself.''

Mrs Hayman said she did all the work from home.

She said she considered herself lucky to be living in Hakataramea's ''remote and beautiful landscape'' with her sheep and cattle farmer husband Tom and their children, aged 2½ and 1½.

She grew up at Lake Tekapo, where her family was involved in tourism, then headed to the United States to be a nanny and work on a dude ranch.

Mrs Hayman pursued her childhood dream of becoming a famous singer, eventually opening for the Hollies and singing for Robert Kennedy jun.

Along the way she lived in Auckland, London and South Africa.

After returning to Tekapo in 2013 and renewing her school-days friendship with Mr Hayman, they married in 2016.

Mrs Hayman said she enjoyed the company of the other women in the district, who dubbed themselves ''the Waitaki wags''. Then she and fellow newcomer Sarah Connell established the social media site Young Rural Ladies, to motivate and inspire women living on the land.

Having started Whistle & Pop before her children were born, Mrs Hayman now works around their needs. She has help to look after them on Thursdays so she can tend to the business.

One of the questions to be answered when entering the Rural Women awards was whether the business' rural location was a difficulty. Mrs Hayman said hers was an advantage.

''The mail woman comes right to my door.

''I don't have to drive to work, so I'm not using fuel, which is better for the environment.''

The only problem was running out of ink for her printer, she said.

Mrs Hayman's win means she goes on to vie for the supreme award, to be announced in Wellington on November 22.

One of the other finalists, Canterbury photographer Amanda King, was a member of the Young Rural Ladies' marketplace, and she was looking forward to meeting her in person for the first time in Wellington, Mrs Hayman said.