Still on the go with harness horses at 87 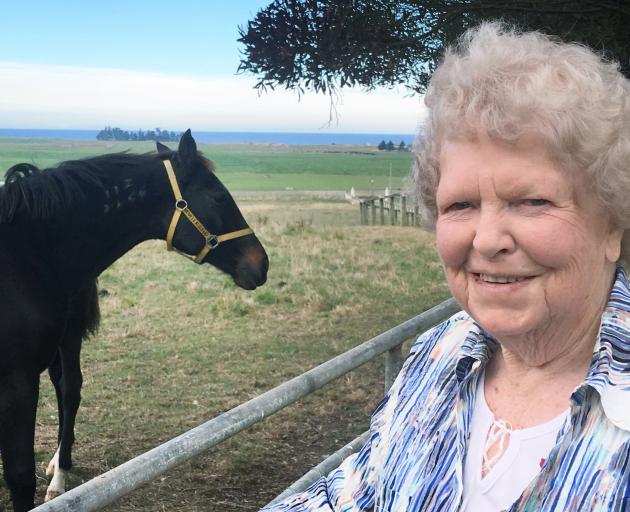 Myrtle McCarthy at home on her Teschemakers farm with Lady Loch, the grandmother of superstar filly Shez All Rock. PHOTO: SALLY RAE
Myrtle McCarthy describes herself as "a tiny cog" in the harness racing industry.

Yet the 87-year-old North Otago standardbred breeder is nothing short of remarkable as she continues a multi-generational family involvement.

Today, Mrs McCarthy will offer two yearling fillies at the All Aged Sale in Christchurch.

She has been breeding horses for about 40 years, since her father gave her a mare called Gypsys Chance.

The Dalgety name is synonymous with harness racing; her late father James (Jim) Dalgety operated the Belmedia stud near Kakanui and had many good horses.

Her brother, Jim, has also been very successful and was inducted to the Addington Harness Hall of Fame for his extensive contribution to the harness racing industry, while her nephew, Cran - Jim's son, is a top trainer.

"It's an awful disease," Mrs McCarthy laughingly quipped, referring to the breeding.

John's father, Peter, bred some good horses, including Terence Dillon who won the Otahuhu Gold Cup in 1928. That cup was later donated to St Kevin's College and has been used ever since for Mass.

Myrtle McCarthy said her father was always "mad" on horses, but he did not get into them until his farm was well-established.

One of nine children, she grew up riding ponies and when her own nine children arrived following her marriage in 1963, they all had a pony - plus there was a spare.

Her daughter, Pauline, has a riding school in Invercargill and she and her husband, Mark O'Connor, breed standardbreds.

Son Peter, who lives in the North Island, recently rode in the Otago Goldfields Cavalcade. He also handles his mother's yearlings, putting them through "standard one and two", as he refers to that period.

Most years, Mrs McCarthy had two horses to sell at the yearling sales. Breeding was her interest and she had never raced horses.

A filly out of Gypsys Chance, called Bonny Belmedia, was sold at the yearling sales and won many races in Australia, going on to be a successful broodmare.

But one of Mrs McCarthy's greatest thrills has been following the progress of superstar filly Shez All Rock, which carries her bloodline.

The New Zealand and Australian filly of the year - which has won the Harness Jewels and the New Zealand Oaks - was sold to the United States for $2.2million.

She was the first foal from Irish Loch, bred by Mrs McCarthy, and was purchased in 2011 for $11,500 by Melbourne's George Tennant.

That daughter of Mach Three went unraced and Tennant sold Shez All Rock to trainer-driver Mark Pitt at a sale in Melbourne, again for $11,500, The Informant reported.

Mark Pitt later made the tough call to sell Shez All Rock to ex-pat Kiwi and now US-based horseman Chris Ryder, and Mrs McCarthy understood the filly was due to start racing in the US.

"The marvellous thing is wee old me, here in a wee back corner ... all of a sudden, I've got this marvellous horse. I can't believe it. It's like winning Lotto just about," she said.

At home on the farm at Teschemakers was Lady Loch - "a real feisty old devil" - who is the dam of Irish Loch and grandmother of Shez All Rock. Her latest offspring would be for sale at next year's yearling sale.

While Mrs McCarthy was pleased with her two entries for today's sale, she said "you never know" what the racing fraternity was after and she would have to "wait and see".

Due to some problems with her legs, she would not be travelling to Christchurch for the sale.

Her daughter Susie Scott would be taking her place, along with Aliesa Hardwick who had been coming out to the farm for the past six weeks and putting the "finishing touches" to the yearlings.

Following the progress of the horses she has bred, and their progeny, was exciting - and "keeps your mind going".

As well as eight horses, Mrs McCarthy also had about 50 head of cattle, two dogs and two cats on her 24ha property.

A quad-bike gave her the freedom to zip around the farm, checking troughs or doing jobs. "I think I've got plenty to entertain myself," she said.

Some asked her why she did not move to a smaller property in town - but she quipped she would have the "fence chewed" in half a day. "I'd go mad," she said succinctly.

She was content to stay in the country, grateful that her children were happy for her to remain there.

"I really think I've had the best life you could have. I wouldn't change anything, nothing ... I think that's why I've survived so long," she said.