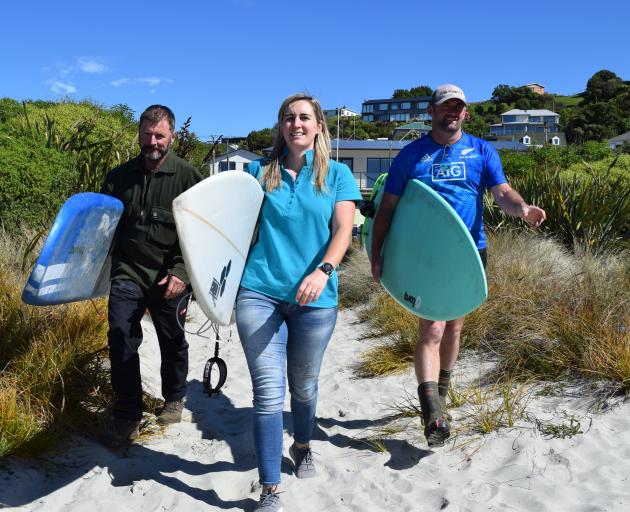 Getting ready for Surfing for Farmers at Brighton Beach in Dunedin this summer are (from left) sheep and beef farmer Peter McLeod, event co-ordinator Becs Cameron and sharemilker Hamish Jenkins. Photo: Shawn McAvinue
The death by suicide of a family member is a driving force behind a Dunedin woman launching a surfing programme to improve the mental health of farmers.

Surfing for Farmers Dunedin co-ordinator Becs Cameron said she decided to launch the learn-to-surf programme at Brighton Beach, following the death of her uncle.

"The stresses and pressures of farming was a bit much for him."

The Surfing for Farmers initiative encourages farmers to surf to help manage stress and improve their mental health.

It was an opportunity "to have a break from the farm — the stresses, the pressures and constant seasonal changes — and give them an opportunity to do something different and get some endorphins going".

Her uncle’s death was a "wake-up call" and she was determined to make the programme succeed.

"I’ve got a real fire in my belly to make it work."

Ms Cameron was raised on a sheep and beef farm near Palmerston and her family were no stranger to the stresses of farming, including battling years of drought.

In her role as an FMG rural manager she frequently heard about the pressures from her clients. 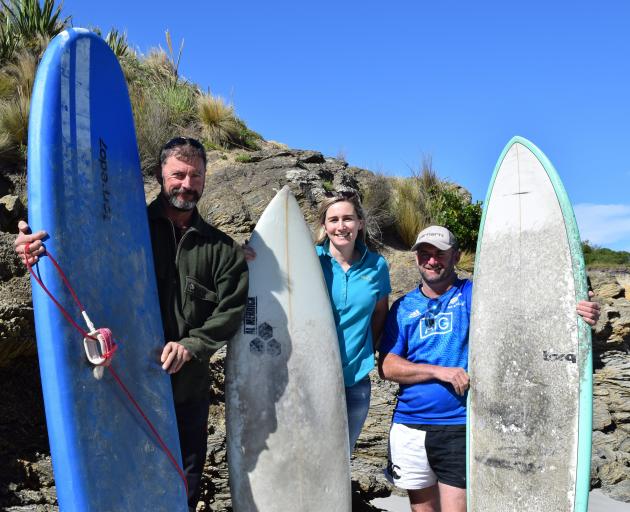 "My driver to put on this event is not only personal, but is also passion. Farmers need to find a way to disconnect from their seven-day-a-week job and reconnect with like-minded people."

The weekly programme was launched in Gisborne in 2018 and was now in 22 regions across New Zealand including Colac Bay in Southland and Kaka Point and Oamaru in Otago.

Surfing lessons, wetsuits and surfboards would be provided by Esplanade Surf School.

Farmers would be coached in groups, depending on their ability.

The free event includes a barbecue, with meat provided by Duncan Venison.

The 13-week programme at Brighton Beach starts on December 16.

Stresses on the farm included finding the right time to cut about 45ha of grass growing around the runway for silage.

He used to surf before he started farming and was keen to get back into it through the programme.

"I’ll dust off the wetsuit."

Sheep and beef farmer Peter McLeod, of Brighton, could see waves breaking from the 470ha farm he leases but had never surfed before.

Farming this season had been tough due to a lack of grass being available because of a dry autumn and having more animals than usual to feed on farm, as meatworks limited the amount of livestock they were accepting due to Covid.

"You just couldn’t shift them — it’s the worse season we’ve ever had."

A decision to sell lambs rather than fatten them this season was "disappointing".

Farmers had a bad habit of staying on farm and working, rather than doing something for their mental health, Mr Jenkins said.

His wife signed him up for the surfing programme to get him off the farm.

"Otherwise I would have just carried on muddling along and being my same old grumpy self but I can see it’s a good idea."