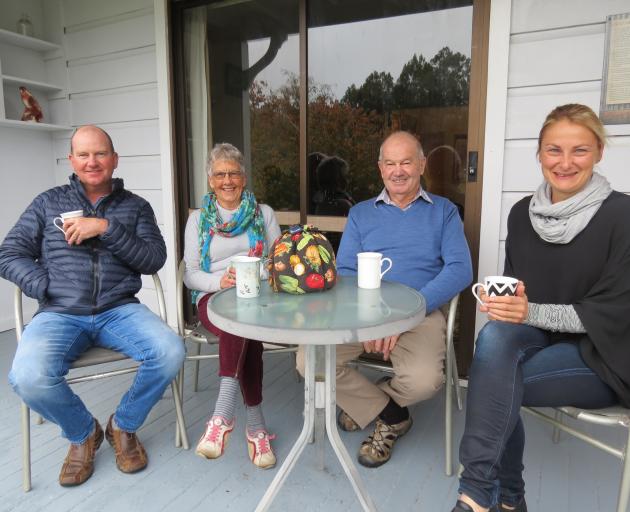 Two of the six generations of the Cummings family share tea at their Tuapeka Flat farm. From left are Phil Cummings, Mum Maureen, Dad Peter and Phil's wife Melinda. Photo: Yvonne O'Hara
The Cummings family, of Tuapeka Flat, will celebrate more than 150 years of farming on the same property at the New Zealand Century Farm and Station awards dinner in Lawrence on May 26.

Peter Cummings said the family's history could be traced to Patrick Cummings, who left Ireland and sailed to the Victoria goldfields in 1857, before arriving in New Zealand in 1861.

Patrick eventually leased 28 acres near Lawrence, which is now part of the family farm.

The family home has been renovated and expanded over time, but still contains original rooms from the cottage that was built in 1873.

''Thirty one offspring have grown up here [in the house],'' Mr Cummings said.

''As well as farmers, we have had 17 members of the family become police officers, including two police commissioners.''

The farm is now largely dairy support, a diversification introduced by son Phil, who took over the property.

''It was a challenge that Phil took up and he is pretty happy with it.''

They run about 1750 cattle, and the Tuapeka Lodge Standardbred Stud.

When Mr Cummings left school he worked on other farms and jobs to gain experience and in an attempt to get his own farm, he applied for government ballots for four years in the 1960s, without success.

He married Maureen in 1963 and they initially leased land from his father Cliff, before buying their own farm at Waitati.

They had six children and had 18 grandchildren.

After seven years at Waitati, they took over the family farm in partnership with brother Chris, after parents Cliff and Joan decided to retire in 1976.

Mr Cummings was also interested in farming innovations and was one of the first to use electric fencing and went on to host demonstration days for the Ministry of Agriculture and Fisheries.

''Electric fencing was the big thing.

''When I came back to the farm we had 35 paddocks and quickly divided it into over 100 paddocks.

''MAF also formed a discussion group, with progressive farmers, in 1967, which was the first in the country.

''It is still in existence today to the second and third generations.''

Mr Cummings was awarded a QSM for his service to the community and agriculture in 2013.

In the mid-1990s, he was involved with the Otago Ballance Farm Environment Awards before being elected national vice-chairman of the BFEA for six years.

He has been treasurer for the Lawrence Chinese Camp Charitable Trust since its inception and was involved with the Simpson Park Hall committee.

He has also has been a trustee on the Clutha Gold Cycle Trail since its inception.

Now he and Mrs Cummings are retired, they have perfected the art of travelling around the world with only 7kg of luggage each.

He said his biggest source of pride are his 17 grandchildren, as they watch them grow up and start their own careers.