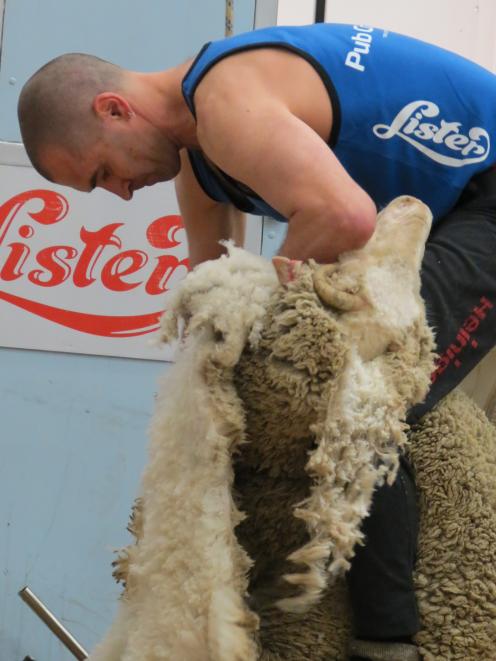 Invercargill shearer Nathan Stratford not only placed third in the New Zealand Open Merino Shearing Championship competition in Alexandra last weekend, he also received the Murray McSkimming Memorial trophy. The trophy is awarded to someone who is considered a role model and who has the respect of their peers within the merino shearing industry. Photo: Yvonne O'Hara
Invercargill shearer Nathan Stratford, was ''utterly shocked'' when his name was called out as the recipient of this year's Murray McSkimming Memorial trophy at the Merino shears competition in Alexandra on Saturday night.

The trophy was awarded for the second year by the McSkimming family, who wanted to honour both Central Otago shearer Murray McSkimming, and a member of the merino shearing industry who was considered a role model for the industry.

The trophy is made from the handpiece Mr McSkimming used to use.

''I was completely and utterly shocked,'' Mr Stratford said.

''It is a very big privilege.

Mr Stratford is based in Invercargill but is working for Peter Lyon Shearing for pre-lamb shearing.

When finished he intends to return home to shear for contractor Darin Forde.

He is competing in the Waimate shearing competition this weekend.

He competed in the New Zealand Open Merino Shearing Championship in Alexandra and placed third.

He has represented New Zealand in the transtasman competition 12 times, in the United Kingdom twice, and at the World Shearing Championships in Invercargill.

Mr Stratford said he enjoyed shearing because ''every day is a challenge''.

''It also puts food on the table.

''I want to thank the McSkimming family for the honour and the privilege to get my name on the trophy.

''Also a big thank you to my family for the sacrifices they make.''

Mr Lyon said Mr Stratford was a shearer of the highest calibre.

''He is just a fella who does everything to the best of his ability as far as shearing goes,'' Mr Lyon said.

''That is why 'Stratty' is so respected as he won't sacrifice anything and will do the best he can do.''

''Nathan is absolutely the best merino shearer in the world. He is a leading shearer in the industry, a role model, especially the way he goes about his work.''

He said his father respected Mr Stratford for his quality of shearing and his passion for the industry and wrote a letter to support his nomination to become a Master Shearer.

''He epitomises what Dad believed in, in the merino industry. We couldn't have got a better winner.''