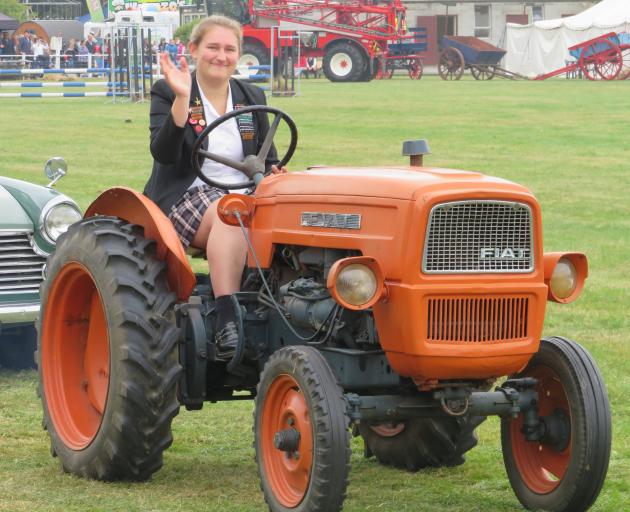 Penny Nell takes a final spin in her 1964 Fiat model 215 orchard tractor before it went under the hammer in the vintage wheels and motors auction at the Methven A&P Show on March 20.
Mount Hutt College student Penny Nell’s burnt orange Fiat is not every 17-year-old’s vehicle of choice.

In fact most would not have anywhere to ride it.

But for Penny it’s been a bit of a treasure. One she has had since she was 5 years old.

She took it for a final spin in the grand parade of the Methven A&P Show in Methven before it went under the hammer in the vintage wheels and motors auction during the show on March 20. 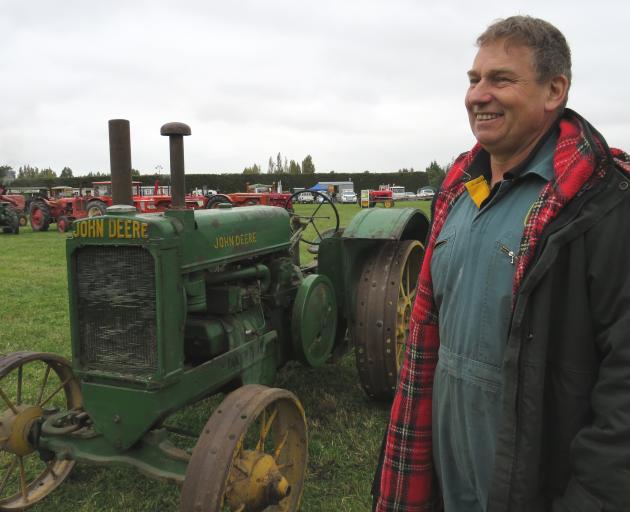 Malcolm Nell with the 1944 John Deere AR steel wheeled tractor up for auction, which was originally bought in exchange for three non-working John Deere tractors.
There was no guarantee it would sell — and it didn’t — but there had been interest.

The auction of quality items included a 1908 De Dion Bouton, a Rover I90 gas turbine generator, a Wilesco D10 model steam engine and a 1970 Acco 16-tonne tip truck. It not only helped collectors make room in their sheds but it supported the Methven Vintage Club and helped to boost the coffers of the Methven Walkway.

Penny’s father Malcolm said the Fiat was a special find and one that had been in the family collection at Barrhill for a long time. He had been unable to find a similar two-cylinder orchardist Fiat anywhere either in New Zealand or offshore.

It was a reluctant sale, as such, but Penny was heading to university next year and needed a car, he said.

The Fiat, plus a 1944 John Deere AR steel-wheeled tractor bought from Giltrap Wrecking Yard which featured in a street parade in Leeston in the 1960s, and another two tractors from the Nell collection also went under the hammer. The auction had many registered buyers at the show as well as others around the country bidding by phone.

It had been sitting for 40 years, last used in the parade as it had been branded with the business name on its side, Malcolm said.

There were still many items left in the family collection with sentimental value and considered family heirlooms from Malcolm’s grandfather, Frank Harris, of Hororata.

But, "you can’t keep them all", Malcolm said about the sale of the four tractors from the family.