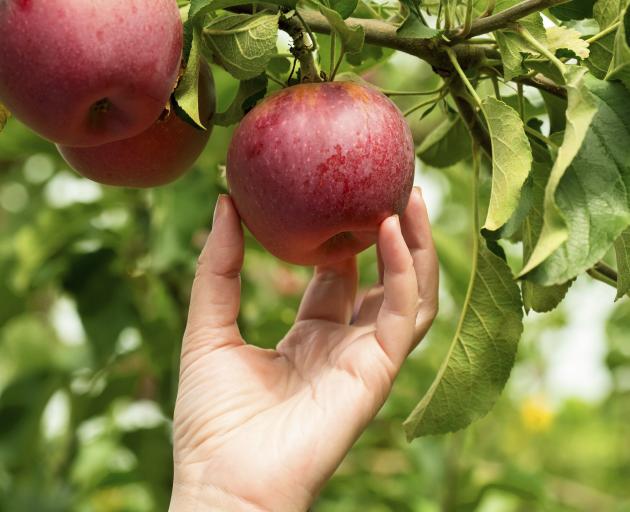 A dearth of fruit pickers has resulted in apple export earnings plummeting. PHOTO: GETTY IMAGES
An industry forecast of a $100million drop in export earnings from apples this season — due to a lack of labour to pick the crop — could be conservative, ANZ’s latest Agri-Focus report says.

About three million fewer cartons were expected to be exported and apple export returns to April were down 25% on the same time last year.

That was $88million less apples exported by value, indicating the industry forecast for the full season might be conservative, the report said.

The labour shortage New Zealand’s horticultural industries was facing had increased the need to invest in labour-saving technology to future-proof production systems, the report said.

With the borders closed, it had been extremely difficult to find sufficient labour to pick and pack fruit this harvest season and export returns for some industries would be severely compromised because fruit could not be picked.

But replacing labour with technology was "easier said than done". At this stage, most of the technology able to be deployed was in post-harvest processing and that was the area where it was easier to find willing locals to work.

It was more difficult to attract workers for the harvesting and orchard management roles, which tended to be more physically demanding.

The sector had become reliant on overseas workers and it had been very difficult to fill jobs this season.

In the apple industry, the focus had gone on harvesting higher-value fruit, meaning lower-return varieties such as Braeburn had been hit the hardest. Braeburn exports were forecast by New Zealand Apples and Pears to be 44% lower this season.

Export returns for apples shipped to Asia were down 18% year-to-date while exports to Europe were down 63%. It was extremely challenging getting product to Europe, but moving fruit to Asia was slightly easier.

Some of the larger exporters had chartered ships to ensure they could get product to Europe. But even the largest companies struggled to fill an entire ship, meaning industry collaboration was needed to make it viable, the report said.

While demand for New Zealand grown kiwifruit remained strong, access to labour might constrain future growth in that industry. That would only increase, unless there was investment in more automated solutions.