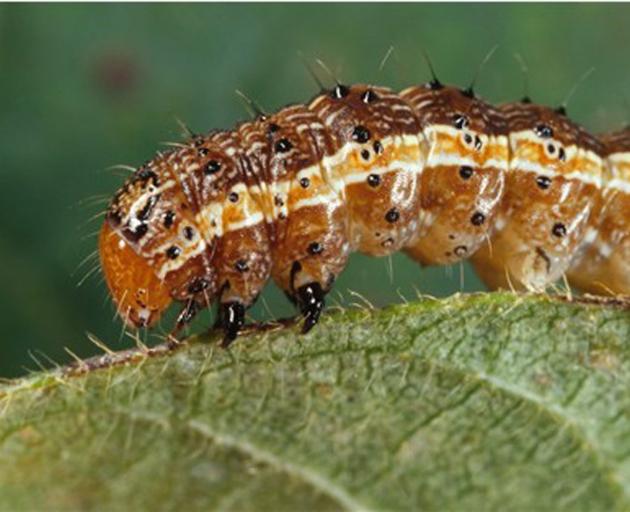 The fall armyworm is on New Zealand’s doorstep. PHOTO: WIKIMEDIA COMMONS
South Island farmers are being warned to brace themselves for the arrival of a destructive caterpillar over the next five years.

The fall armyworm is a threat to maize silage, grain and sweet corn with adult moths capable of flying long distances.

With the right wind conditions, a study by the Ministry for Primary Industries found they could make their own way here from Australia.

They would likely set off on a flightpath from coastal New South Wales and southern Queensland in May and in the spring.

Computer modelling shows they would probably land in the South Island, especially on the West Coast. However, they could also end up in Northland, where they are more likely to thrive because of its warmer climate.

Foundation for Arable Research (FAR) research and development manager Dr Andrew Pitman said the pest was virtually on our doorstep after landing in Australia at the beginning of 2020.

Most of the maize growing is found in the North Island, but yields are increasing in Canterbury. The growing regions north of Waikato are mostly at risk as it’s questionable whether large populations could survive the winter.

‘‘It’s a voracious eater and in the larger caterpillar stage it can get through a crop in one to two nights. There are reports of a farmer looking at a crop and returning to a farm a few days later to see it decimated.’’

The fall earthworm prefers maize, but has found a liking for sorghum in Australia and some grass species.

Their growers have brought in a virus called Fawligen as it’s been found to develop a resistance against chemical pesticides.

Dr Pitman said it had spread beyond warmer parts of its home country in the United States.