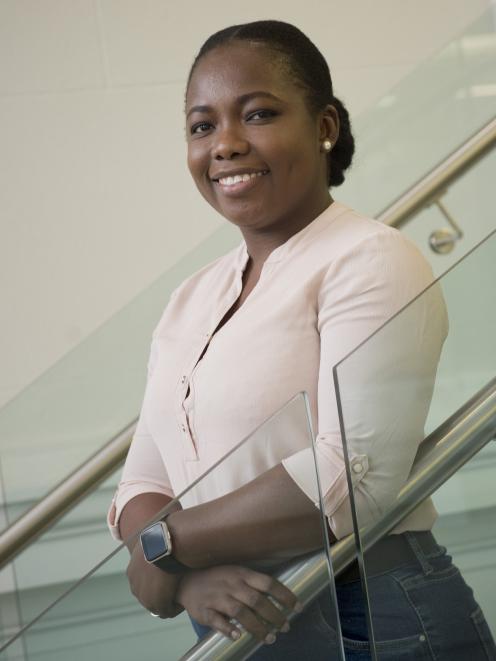 Ireti Balogun is joining AbacusBio’s office in Edinburgh after spending the past few years in Dunedin. PHOTO: GERARD O’BRIEN
She's moving from the Edinburgh of the South to the original Edinburgh.

But when Nigerian academic Ireti Balogun first arrived in Dunedin, little did she know what she would take away from the southern city.

Ms Balogun (29) came to agribusiness consulting firm AbacusBio as an intern for six months in 2018. After earlier embarking on studies in general agriculture, she won a scholarship to the United Kingdom to study for a master’s degree in sustainable agriculture and food security.

Thinking how she could apply her training back home in Nigeria, she wanted to gain more knowledge in another developed country, which led to the internship in Dunedin.

Shortly after arriving, AbacusBio consultant — now managing director — Dr Peter Amer asked if she would be interested in doing a PhD.

So she embarked on her studies as part of a huge international research project on cassava crop genetic improvement and included research on human nutrition aspects.

She handed in her thesis this month and also recently secured a job with AbacusBio in its Edinburgh office. Her new husband, whom she met in Dunedin, will join her in the move to the UK.

Cassava was an important food security crop in Africa, Ms Balogun said. She likened it to rice in Asia, as it was consumed widely throughout the country.

She wanted to explore how to use such an important staple to improve the livelihoods of people, she said. While there were projects to improve the crop itself, farmers — who were mostly smallholders — were not readily adopting the improved varieties.

One of the reasons for that was the improved varieties did not meet their needs as they were so attached to local, traditional cultivars, she said.

That was where AbacusBio’s expertise came in, utilising decision-making software 1000Minds co-founded by University of Otago economist Paul Hansen, to help understand the preferences of farmers.

The international cassava research project involved many people, including a collaboration with Cornell University and funding from the Gates Foundation.

She felt privileged to be at AbacusBio and helping solve some "real life" issues. That felt rewarding, as the output from her work was important for smallholders in her home country.

The timing of the PhD was perfect — she was in the perfect place and it was the perfect time to do it at the University of Otago.

She was moving to Edinburgh at the end of May "for a second dose of summer", Ms Balogun quipped.

While sad to leave Dunedin, she believed the move meant she was better positioned career-wise. There were plenty of possible collaborations in the UK and Europe and it was also closer to home. Her family watched her wedding at Olveston online and she hoped to visit them as soon as possible.

She would be involved with a wide variety of projects for AbacusBio while also making new connections and exploring opportunities for the business.

"You can’t get bored at AbacusBio — there are so many different things."

She was grateful for the support from Dr Amer and Dr Peter Fennessy from AbacusBio, and also her supervisors at the university, Ms Balogun said.

It was the perfect opportunity to do a PhD with AbacusBio involved in international work and having the university nearby to support her.

"This is the best place I could have been for the past three years."

She grew up in the city and was not from a farming background, she said. A mentor told her she should study agriculture, saying she would be among those at the forefront of change in the country.

But she realised she needed skills and work experience in the interim, which was why she was staying on at AbacusBio.

Even at government level, technology uptake could be quite slow and a bottom-up approach needed to happen, with farmers leading it.

She had travelled across Nigeria asking questions and gaining an understanding of farmers’ perspectives. It had been beneficial being Nigerian as she spoke the language of the people.

Africa’s population was projected to explode and food was needed to feed that population. She believed more young people needed to become involved in agriculture.

Subjects such as IT and engineering might be perceived as more "sexy", but agriculture could be sexy as well. It was also vitally important, as people needed food.

Many people from poor countries were seeking opportunities overseas and there were benefits to studying overseas. She felt a strong sense of the need to give back to where she came from.

"It will always be home for me, wherever I am," she said.

She had no regrets about her chosen career; it had taken her to the UK, which in turn led her to New Zealand, and it had been an interesting journey, Ms Balogun said.

Asked what she would miss about Dunedin, she said the scenery was "so beautiful" but mostly it would be the people.