Pioneer of Central Otago winemaking still in the business 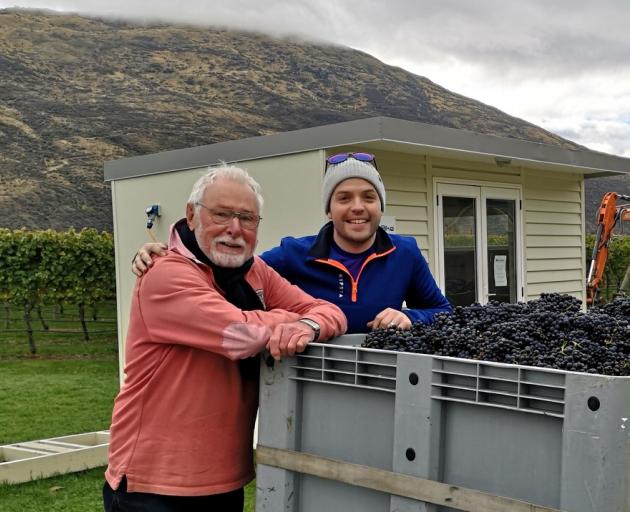 Not-quite-retired grower and winemaker Alan Brady (left), of Clyde, and Irish winemaking intern Brian Shaw used fruit from the Kinross vineyard in Gibbston to make wine for Mr Brady's Wild Irishman label. Photo: Alan Brady
Reverend Samuel Marsden did not know it, but when he planted the first grapevines in Kerikeri, Bay of Islands, on September 25, 1819, he was indirectly introducing an industry that is now earning Central Otago millions of export dollars.

Frenchman Jean Desire Feraud introduced wine grapes into Central Otago in 1864 at Clyde, as did Alexandra businessman Thomas Oliver in the same decade.

They were also indirectly responsible for the modern vibrant wine industry in Central Otago.

There are now 135 wineries and 32 grape growers, producing wines that attract global accolades. 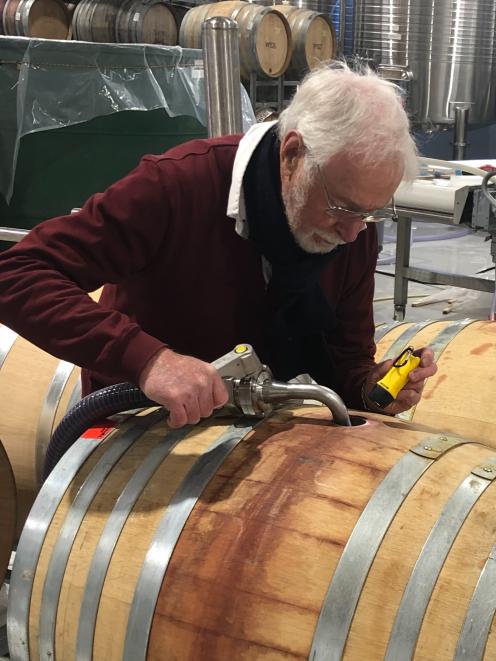 After 38 years of grape growing and winemaking in Central Otago, Alan Brady, of Clyde, fills barrels with some of his 2019 Wild Irishman Pinot Noir, in April. Photo: Alan Brady
There is 1884ha planted in vineyards, of which 1502ha is planted in pinot noir, and last season the region produced 11,868 tonnes of wine grapes, New Zealand Wine Growers says.

NZWG marked the anniversary of the Rev Marsden's planting with a ceremonial replanting of a vine at the historic Stone Store at Kerikeri last Wednesday.

Alan Brady, of Clyde, who was one of the modern pioneers who saw the viticultural possibilities in the Central Otago region, was invited to attend the celebration.

Mr Brady is a former Otago Daily Times journalist who emigrated from the UK in 1959 and worked for the paper from 1960 to 1964.

He then worked in radio and regional television news in Dunedin for 12 years, before moving to the family's land in the Gibbston Valley in 1977.

''Among the many things I thought about was growing grapes, but people kept saying you can't grow grapes in Central Otago as it was far too south and too cold.

''However, at 45deg it was the same latitude as Bordeaux.

Mr Brady, Rolfe and Lois Mills, of Rippon, Wanaka; Rob Hay, at Chard Farm; William (Bill) and Gillian Grant, of William Hill, Alexandra; Verdun Burgess and Sue Edwards, of Black Ridge, Alexandra; and Ann Pinckney of Queenstown, pioneered the vine in Gibbston, Alexandra and Rippon, in the 1970s and 1980s.

Mr Brady planted his initial3ha of grapes in the early 1980s and produced Central Otago's first commercial pinot noir in 1987 under the label Gibbston Valley Wines.

''I also planted everything under the sun - riesling, pinot gris, and gewurztraminer.''

He later sold his company and established the Mount Edward winery.

In 2004 he semi-retired and started the Wild Irishman label, which produced the Three Colleens, named after his three daughters, and later Macushla, which means ''My darling, my pulse''.

He said Central Otago in a short time had been recognised as one of the premier wine regions.

''New Zealand is the first country that can name the first time grapes were planted, which is pretty unique.

''I don't think very many New World countries can say that.''

He had visited Slovenia in Eastern Europe, which has made wine for more than 2000 years.

''It puts the rest in perspective.

''We are upstarts from the bottom of the wine world.''

''Central Otago has come from nothing to - in 40 years - be the third-biggest region in the country after Marlborough and Hawke's Bay, and the fifth-largest in terms of production.''

Seasonal labour availability is a key issue and the viticulture industry is in competition with the orchards for workers at the same time of year.

''We rely on seasonal labour and without Seasonal Solutions bringing in labour from Vanuatu [and other Pacific islands], we would not survive.''

The industry now attracted young viticulturists to the region for work, many of whom stayed.

Some arrived as part of an exchange programme with other countries.

''Very few leave the region, as they are stimulated by the challenge we all felt.''

''It is an industry driven by passion and there is something mystical about it,'' he said.

Mr Brady was made a fellow of New Zealand Winegrowers in 2015.