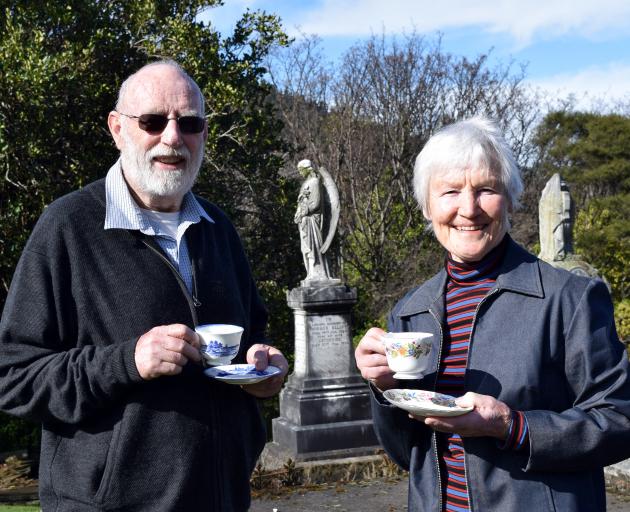 Heritage Roses Otago committee member Rex Thomson and Southern Heritage Trust trustee Ann Barsby enjoy a cuppa in Northern Cemetery in preparation for the Savoy afternoon tea next week to celebrate the replanting of heritage roses in the cemetery. Photo: Shawn McAvinue
The poisoning of hundreds of heritage roses in a Dunedin cemetery remains a mystery but as a rally to replant nears an end, the celebrations are set to begin.

Southern Heritage Trust trustee Ann Barsby, of central Dunedin, said a ‘‘major disaster’’ struck in late in 2016 when about 500 roses were sprayed with herbicide in the Northern Cemetery.

‘‘It was doom and gloom when it happened.’’

The party responsible for killing the shrubs, including several memorial roses, had never been identified.

An investigation proved the herbicide used was different from the one used by the Dunedin City Council contractors which worked in the Victorian garden cemetery.

‘‘It’s all very mysterious and unexplained.’’

Northern Cemetery was opened in 1872 and back then tombstones were imported from Italy and ‘‘hellishly expensive’’ so many people planted roses instead.

After waiting for the soil to recover Heritage Roses Otago members replanted about 300 rose plants last winter, and another 70 rose plants this winter.

The replanting was nearly complete and the final 10 plants to be put in cemetery soil would finish the project.

To celebrate, the trust was holding a public afternoon tea in The Savoy next week.

When the roses were in flower, the council and Heritage Roses Otago would hold a joint celebration in the cemetery in the first weekend of December.

Fencing had been installed after the young roses in a bid to stop rabbits eating them ‘‘right back down to the earth’’.

The young roses had survived the frosts with ease.

★ The public afternoon tea to celebrate the roses of Northern Cemetery is on at The Savoy in Princes St at 2.30pm on Thursday, September 12. Reservations essential. Call 477-4649.

★ Heritage Roses Otago (HRO) and the Dunedin City Council will celebrate the return of heritage roses to the Northern Cemetery with talks and tours on December 7 and 8.