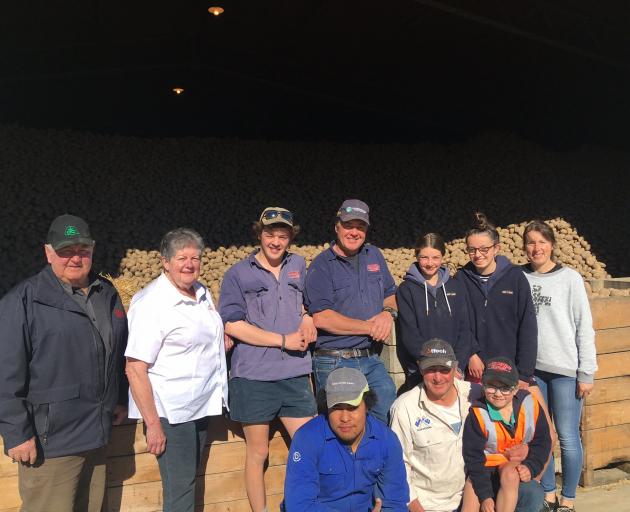 The Collins clan (back, from left) Peter, Bonny, Jonty, Hamish, Emily (13), Mackenzie (15) and Melanie, and (front) Simon Lemota, Brent and Lucas (6) pulled together to drop off a 10kg bag of spuds to every household in Pareora. PHOTO: CLAIRE ALLISON
Peter Collins is the Santa of spuds in Pareora.

For the second year running, the Pooke Rd farmer has rallied his family to bag up 10kg bags of potatoes to deliver to every household in Pareora.

Last year’s delivery was during the Alert Level 4 lockdown, but with different advice from police this year, the Collins clan had to wait until Level 3 in order to carry out the drop-offs.

Three generations of the family work together on Dalmore Farm, so many hands made light work of bagging up the potatoes, loading them on to the truck and carrying out the delivery.

‘‘We stayed in our own bubble, and went out.

‘‘Nobody really sees us. We just duck in and out, and leave them at letterboxes.

‘‘There’s a lot of stops and starts, so it’s probably about four hours all up.’’

The Agria potatoes, which were left with a contact phone number, were well received.

As far as Mr Collins was concerned, it was just something the family could do for their community — and a couple of tonnes of Agria potatoes out of a yield of about 1000tonnes did not make too much of a dent.

Pareora born and bred, Mr Collins went to school in the township before making a start in farming as a young man.

‘‘I started off growing spuds.

‘‘I was only a kid, with no money, so I went around farmers and asked for their roadsides.

A big part of the Dalmore Farm operation is now a 1200-head herd of dairy cows, but Mr Collins said he was not yet ready to give up the potatoes completely — 100ha was now about 20ha, and while that might eventually reduce more, he was not sure there would come a day there were none on the property.

‘‘I’ve just about finished growing spuds, but it’s a bit of a disease with me,’’ he said.