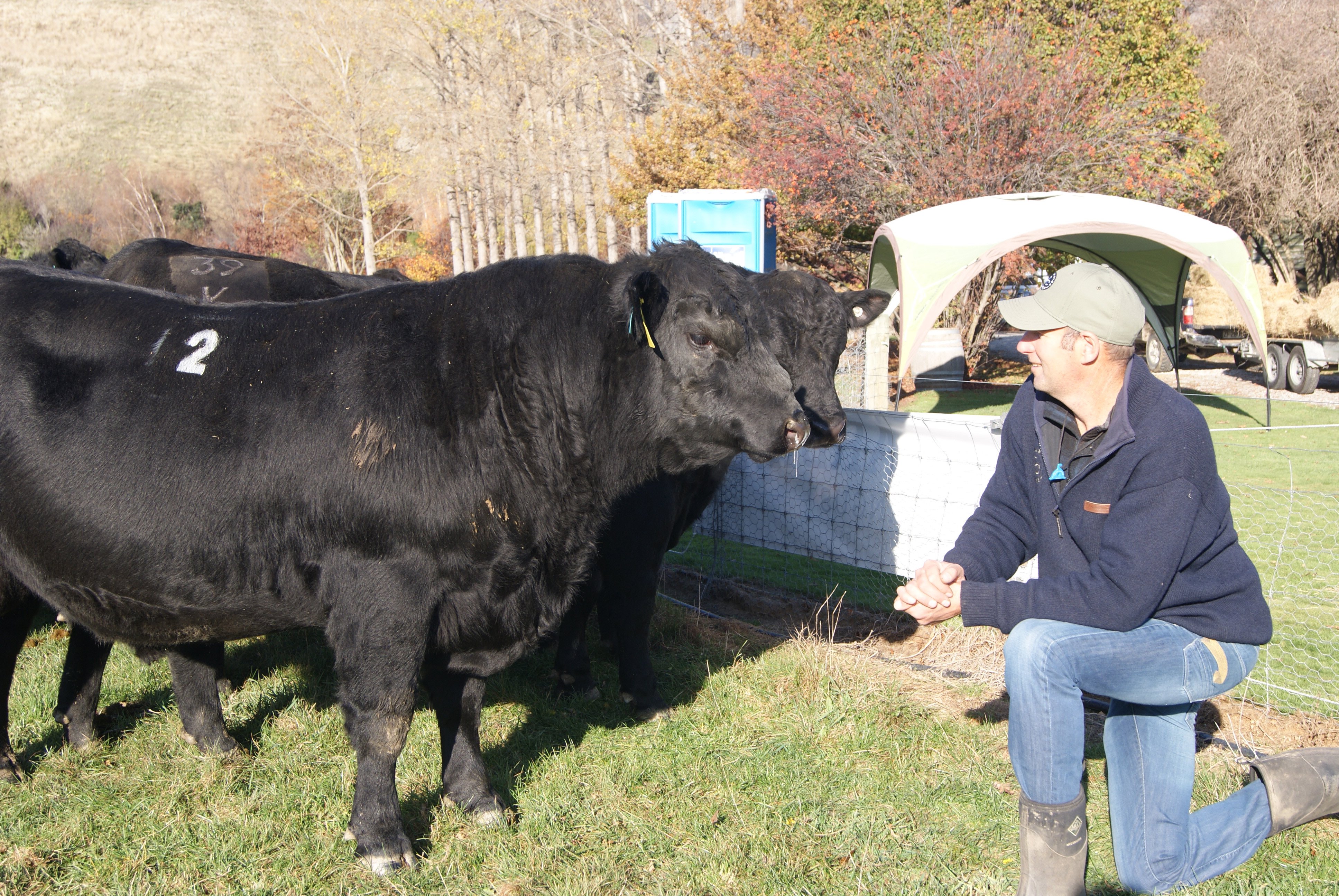 Mr Smith, who described it as a "momentous occasion", said it was a great reward for the hard work that had gone into the stud over a long time.

He was delighted for everyone who had been involved with the stud, including his parents who established it in 1969.

Alistair and Di Smith later sold their farm in the Canterbury foothills and share-farmed the stud cattle with friends in the industry until Mike and his wife Gemma were in a position to take it over.

"They laid the foundation for what we have today. It was a very memorable occasion for them as well," Mr Smith said.

At the sale, they sold 14 bulls throughout the South Island for an average of $14,585; the top priced bull — which was the second lot — was bought by the Giddings family’s Meadowslea Genetics at Fairlie.

It was the top price of the bull sale season so far. Last year, Canterbury’s Mt Possession Angus set a South Island record selling a bull for $88,000.

Before the sale, the bulls had received an "amazing" amount of interest and the couple had high expectations which the sale exceeded, Mr Smith said.

The top-priced bull had the X-factor; his depth and thickness were "absolutely incredible" while his female bloodlines were "just superstars" of the herd.

The bull also had wonderful phenotypical attributes that the industry needed and Mr Smith was looking forward to seeing how it performed for Meadowslea.

"That’s the rewards for us, to go and see how cattle perform in other people’s environments and breeding programmes."

Mr Smith believed the Kincardine breeding programme had "really come to fruition" to offer an outstanding line-up of bulls.

The interest showed there was demand for the type of bulls they were offering. Their focus was on breeding bulls which were thick, sound, quiet and phenotypically correct, with performance numbers.

The top-priced bull had the data to back up his phenotypic looks, he said.

Mr Smith said the couple were not ones who shouted from the rooftops — "we like our cattle to do the talking, rather than us" — but he was very proud of what they had achieved over the years "going about it our way".

Their business operation was a little different from most stud breeders; as well as their Angus stud, they also owned and operated child-care centres.

The cattle were a passion, which they "live and breathe", and it fitted in alongside their lifestyle and other businesses. "Everything has to work in together to make the whole system work," he said.

They farmed a 90ha property, part of which they owned and part which was leased, and their goal was to farm on a larger property to further develop their stud.

They have 60 stud cows and, because it was a smaller herd, they had very strict criteria about females coming into the breeding programme.

That worked in their favour having 60 top quality cows which was paying dividends.

The Smiths have a sensational view of Lake Hayes across the front paddock from their home and farm in the middle of a semi-urban area with a diversity of land ownership and use.

That provided some challenges, concerning the likes of rabbit control, but there were also many benefits being so close to an urban centre.

They were also grateful to live in "one of the more beautiful spots in the world"; being able to celebrate a successful bull sale in that paddock, with a few beers, was very special.

Mr Smith was vice-president of Angus NZ and it was a joy to be on the board with a great bunch of progressive people.

The successful Kincardine sale was not just a reflection of the stud but a great promotion of Angus as a breed, he said.

They had an ability to thrive in harsh environments and produce a great product that ultimately provided a great dining experience.

Yesterday, purchaser David Giddings described it as a "pretty exceptional bull" having traits he believed were so important for the hill country environment.

"He really ticks an awful lot of boxes."

The bull would be sent to an artificial insemination centre in the next couple of days so that semen could be collected and immediately made available to the wider industry.

Mr Giddings believed that was key, given the bull had so much to offer, to spread the genetics through the industry, both to commercial and stud breeders and he also believed there was an opportunity for the dairy industry as well.

He bought the bull via the Bidr online auction system while standing in a paddock showing visitors his own Meadowslea bulls.