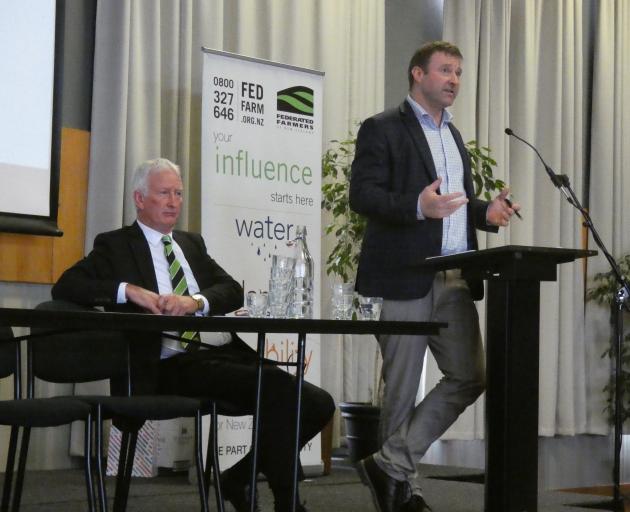 Southland Federated Farmers president Geoffrey Young (left) and NZ First MP Mark Patterson address Southland farmers' concerns surrounding the public's view of their role in climate change at their annual meeting yesterday. PHOTO: ABBEY PALMER
Tension lay heavy in a room full of farmers this week, many of them feeling as though the whole country had been pointing the finger at them.

An attendee said he could no longer turn on the TV or radio without facing backlash from the public for being a farmer.

Federated Farmers member Stuart Collie said it seemed Parliament was encouraging the public to "attack" the farming and agricultural industries for the state of the environment.

His statement was met with applause.

NZ First MP Mark Patterson said the industry contributed a significant amount to the economy and he would "take on board" farmers' feelings about poor treatment.

He spoke on behalf of the Minister of Education Chris Hipkins, who was absent due to health reasons.

Mr Collie said "urbanisation" had changed the connection between urban and rural communities, particularly when the environment became a more prevalent issue.

"It used to be fairly common with a lot of engagement between the two, but now we've evolved into the larger cities, most of the commentary around farming tends to go to them [city people] in a negative fashion."

He said on one hand farmers were being told to increase production to feed the world but on the other, were told they were damaging it.

"Farmers will adapt to the demands of the public, but apart from those who make a hell of a lot of noise, like the vegans, the majority of the population want to eat meat and people need to realise that."

Other topics were discussed at the meeting including biosecurity threats like Mycoplasma bovis, and the need for more young people in the primary industries.

Farmers, a big thank you, from me.
I most curtainly appricate the work you do and enjoy the food you produce, every day. I am sure most people do.
It is only a small group, that are the darlings of the media and fear peddling, politically driven doom sayers that spew such hate, in their favoured form of moral superiority and virtue signalling, that you are hearing.
The end is nigh, they claim. Bull excrement, I say.