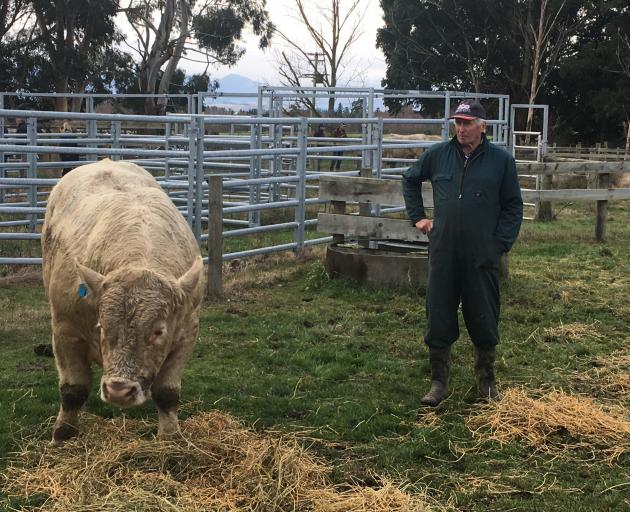 Alistair Holland checks up on a Charolais bull ahead of the Hemingford Charolais on-farm bull sale last month. PHOTO: DAVID HILL
When the Holland family first moved to Culverden in 2000, running sheep and cattle studs was not on the horizon.

Alistair and Lissa Holland bought the 955ha Hemingford property and moved from Manapouri to North Canterbury to take over commercial Corriedale ewes and Angus cows.

Fast forward two decades and Hemingford has a growing reputation for Charolais bulls, and Texel, Romtex and Suftex rams.

"When we first came here the sheep were Corriedale, but the performance wasn’t very good, so we bought 100 ewe lambs from the Turanganui Romney stud in the North Island and put them out with the Corriedale ewe lambs and compared notes," Mr Holland said.

"As two-tooths, the Romney were just so far ahead, so we decided to go with the Romney.

"We had a Romney stud down south so I knew the breed, but I had done my thing with studs."

The couple’s son Sam returned home from overseas in 2001 and it ultimately led to a change of direction.

Almost by accident, the Holland family began breeding Charolais cattle as a neighbour asked them if they could look after his cattle.

"We share-farmed them for him and when he died more than 10 years ago we bought out his share," Mr Holland said.

"We decided if we were going to going to be in it, we might as well build it up.

"The stud is really Sam’s thing. He’s absolutely passionate about his stud stock and it just went from there."

The Hemingford Charolais stud was established 15 years ago and the 12th annual sale was held last month.

"The Charolais is a fantastic marker. The calves finish quick and they’ve got all the attributes that you need in a terminal cattle beast," Sam Holland said.

"Terminals are well used in sheep, but they’re under-used in cattle, although the Charolais is getting a bigger and bigger following."

The Holland family got into breeding Texel sheep after a stock agent approached them about a Texel stud being up for sale.

Since then Hemingford Texel rams have twice topped the sale at the Canterbury A&P Association elite ram and ewe fair.

Of the original 955ha property, 270ha is downs and flats with the balance steep hill country.

A 215ha irrigated property, The Willows, has since been added to the operation to be used for finishing stock, which made a big difference this summer with ensuring the bulls were in good condition ahead of the bull sale.

While the farm looked green for the sale, Sam Holland acknowledged prospects did not look as bright a few weeks earlier.

"It’s greened up well and we’ve had a great June which has got us out of trouble. It was very, very dry. Like most places it’s been a tough run for a lot of people with drought and floods, so, hopefully, the winter is reasonably kind to most people.

"The irrigation makes a big difference and with the genetics we’re trying to focus on a more meaty style of Charolais as they are easier fleshed and an easy finishing animal.

Sam and wife Viki were responsible for the day to day running of the operation, which comprised 265 stud Charolais cows and 2500 stud ewes and nearly 1000 ewe hoggets.

There were plans to increase to 300 Charolais cows.