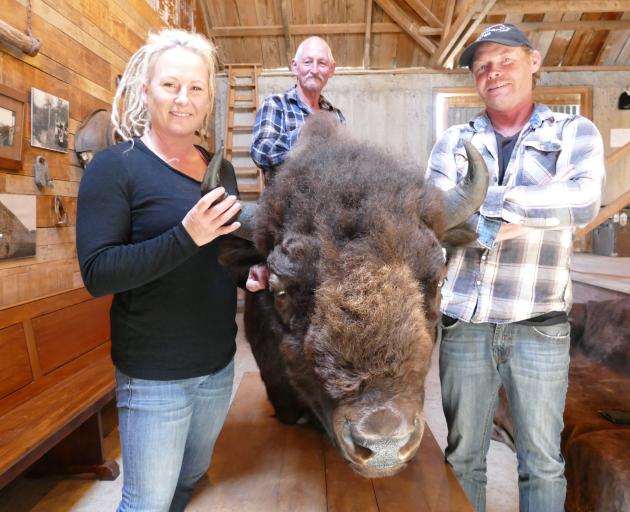 Nadia and Blair Wisely with Bobo the bison, their original sire. In the background is Bobo's breeder Dennis Greenland. Photo: Ken Muir
A chance meeting with an engineer building a cowshed on a neighbouring farm next door to Nadia and Blair Wisely introduced them to bison and from there they've taken to producing beefalo - a bison beef cross - on their Isla Bank farm.

''We met Dennis Greenland by chance and he had purchased animals from a Marlborough breeder Bob Blake'', Mr Wisely said.

''He told us about the animals and that piqued our interest.''

The Wiselys purchased a bison bull, crossed it with a range of cows and Netherton Farm Beefalo was born.

Mr Wisely farms what was originally part of his family property and over the years had moved it from a sheep and grain operation to beef and dairy rearing. The Wiselys have been farming in Isla Bank since the 1860s.

''We focus on producing feed for a large dairy operation in the area as well as the beefalos, which are still a relatively small part of our business.'' 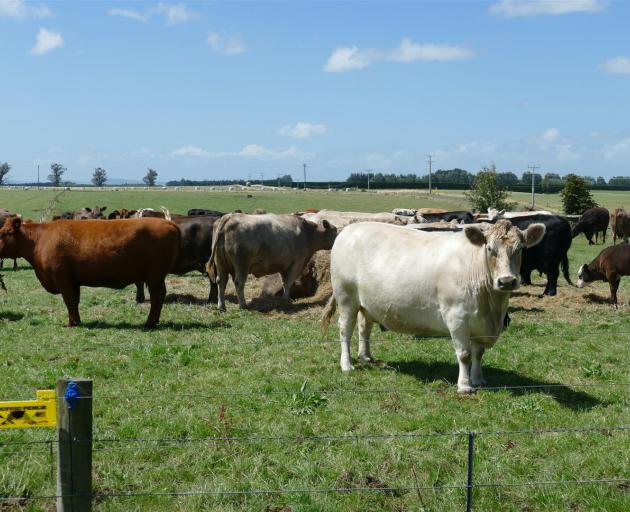 Some of the Wisely's Beefalo herd.
He said they had 55 breeding cows and the used AI with semen imported from the United States. The plan was to eventually use their own sire with the goal of achieving a bison ratio of between 17.5% and 37%, the allowable range to be able to market the meat as beefalo.

Breeding is not necessarily straight forward. The bison is not a bovine species, being related to deer, and it can be a challenge to get them to mate with cows. The animals have a low birth rate, albeit with high growth rates.

Mr Wisely said the result is an animal of amazing speed and agility for its size.

Beefalo have been produced in the United States since the 1970s, although things were done the other way round from New Zealand, beef cattle being crossed with bison cows.

''Bison have amazing intelligence and don't seem to forget anything,'' Mr Wisely said.

''While they are quiet and not scared of humans, they can be dangerous if they have calves.''

The Wisely's original bison, Bobo, was a 2-year-old full-blood who had been brought up with cattle.

Mr Wisely said it was a big blow when Bobo died suddenly, although his memory lingers in a wall-mounted head which is kept in Netherton's ''Beefalo Barn''.

Marketing the beefalo meat is not a huge difficulty, as demand far outstrips supply.

Mrs Wisely takes care of that side of the business and said the reality is that they are only a small producer.

''We provide steak to a restaurant in Invercargill and the rest of the meat goes into beefalo salami and to a bakery in Lumsden, which produces beefalo pies,'' she said.

Mr Wisely said the beefalo journey had been an interesting one, with a few errors along the way.

''These mistakes sometimes cost money but we see that as the price of learning.''