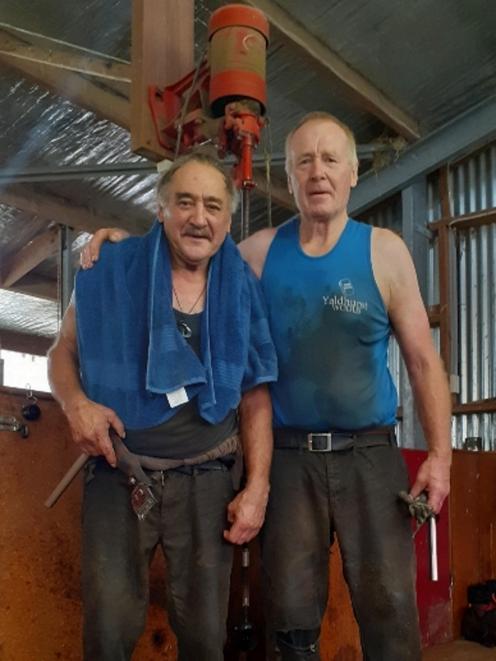 Matt Day (left) and Kelvin Webster have been shearing together for more than 20 years. PHOTO: SUPPLIED BY DIANE WEBSTER
An eight-month student exchange was enough to convince Diane Webster that New Zealand was the place to be.

The Dunsandel-based shearing contractor first visited New Zealand from the United Kingdom on a student exchange in the 1980s.

"I had always been in sheep farming. My dad was a sheep farmer and a stock truck driver and he used to shear sheep in the summertime, so shearing sheep was in my blood."

She learned to shear while at agricultural college in the UK and when she first came to New Zealand, the host farmer encouraged her to do a shearing course so she could shear in this country, too.

"The sheep are very different over here, with wool all over the belly and with the composites, it’s a bit different," Mrs Webster said.

"I soon realised how hard work it was shearing, so from there I realised I was quite happy to be a shed hand."

After completing the eight-month exchange and then six months in Australia, she decided to return to New Zealand.

"When that exchange finished I was supposed to go back home, but I figured what was there to go back to with the UK winter, so I came back to New Zealand." 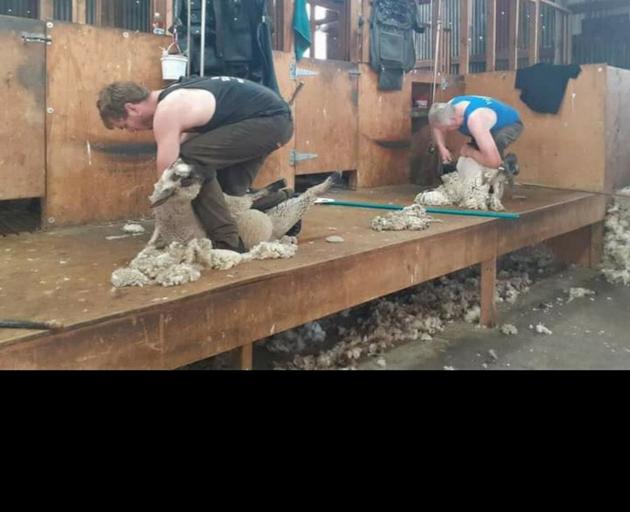 Kelvin Webster (right) and his son James work together in the shearing shed. PHOTO: SUPPLIED BY DIANE WEBSTER
She worked a season for Lincoln shearer Ken Haldane, before returning to the UK in time for spring lambing, "but I realised I liked New Zealand better".

After returning to work for Mr Haldane she met a young shearer, Kelvin Webster, and the couple later married before taking over the business in 1995.

Today Mr Webster and son James do the shearing with three full-time shearers and a casual shearer, while Mrs Webster runs the shed and two wool classers are called on as needed.

Shearers Matt Day and Anton Kuru have both worked for the Websters for two decades.

"Matt Day has shorn with Kelvin for 22 years and he’s 74 now and he’s such an awesome guy," Mrs Webster says. 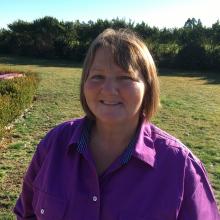 "There’s definitely more women shearers on the scene now. We had a girl from Scotland who worked for us for five or six seasons and now she’s right up there and shears all over the world.

"Some of the women are really amazing, because it’s still a very physical job. Even just dragging them [sheep] out alone is a mission, but a lot of it is technique and the women are often a bit more patient and seem to be on average tidier and cleaner in their work."

While she had enjoyed being a shearing contractor, it was not for the faint-hearted, Mrs Webster said.

"The business is your whole life. For me and Kelvin, I don’t think we would change anything because we’ve enjoyed it, but I don’t think I would wish it on anyone else.

"These days there’s lots of regulations and staff come and go, but we’ve been lucky with having good staff. We do things slightly differently, as we would rather a shearer slow down and tidy them up. It’s about quality over quantity.

"For us it’s always nice to get the comment about how well the sheep are presented when they are sent to the saleyards or the freezing works."

Aside from shearing, the Websters live on a 10ha block at Dunsandel and have a farm at Rakaia, where they winter 1000 hoggets to fatten.

James Webster also has 40 Suffolk ewes as a sideline.

"When James and our daughter Ady were little they were into the Suffolks, so we bought eight pure Suffolk ewes and then they decided there was more money in trading sheep, so I bought them off them," Mrs Webster said.

"But now James has reclaimed them and he’s trying to produce a Suffolk-Poll Dorset-cross sheep and has six ram hoggets at the moment.

"You try to teach your children to follow their dreams and try to encourage them to do something good."