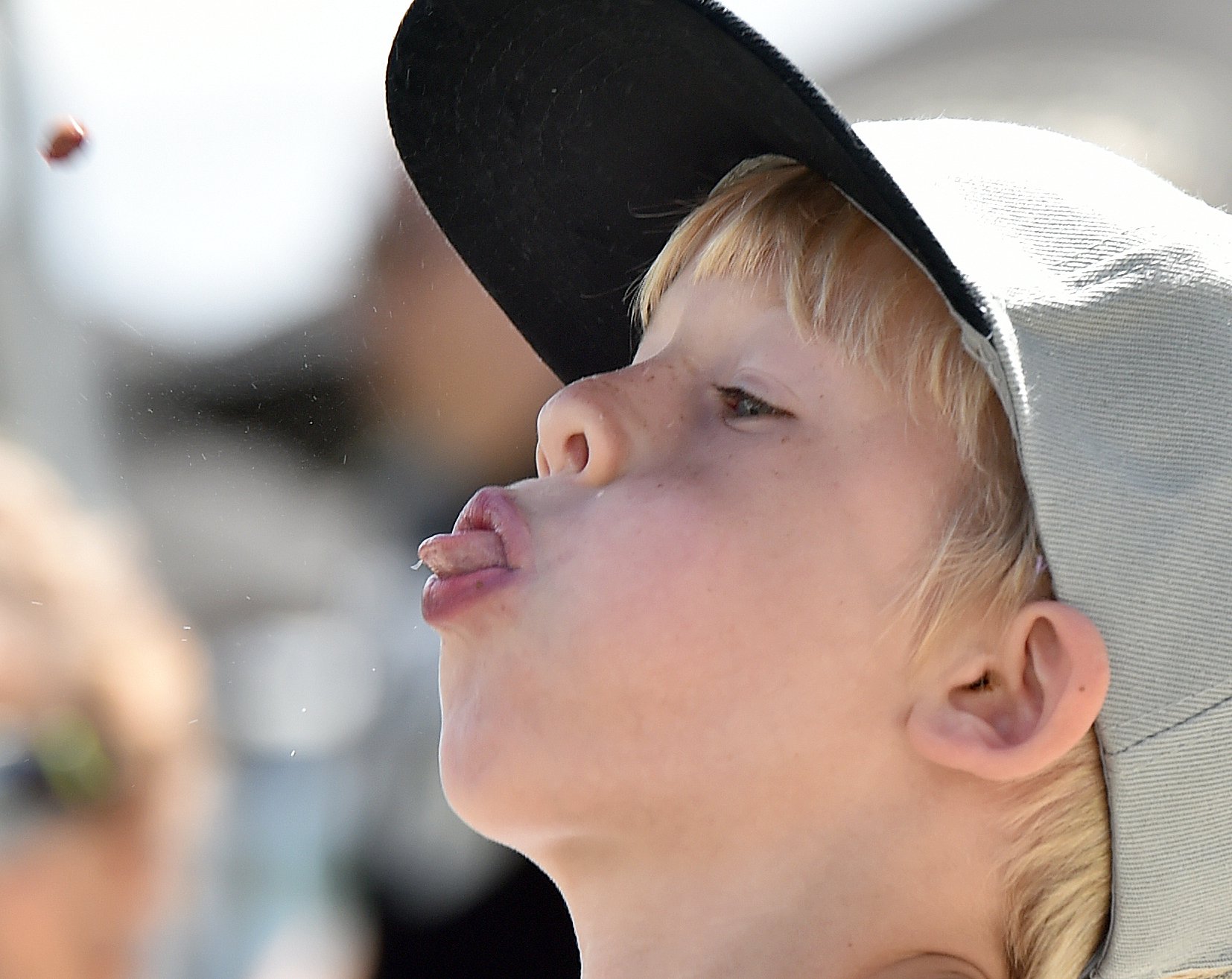 Dontae Sloane-Varley (6) of Wanaka demonstrates the skills that led him to win the 6 and under category at the New Zealand Cherry Stone Spitting Championships in Cromwell yesterday. PHOTOS: PETER MCINTOSH
Tui Smith displays grit when he spits cherry pits - reloading again and again to defend his title as New Zealand cherry stone spitting champion.

He had another goal in mind at the national championships in Cromwell yesterday.

That was to spit further than the 14.25m New Zealand record set in 2018 by three-time champion Aaron Collins, of Dunedin.

It was not to be. 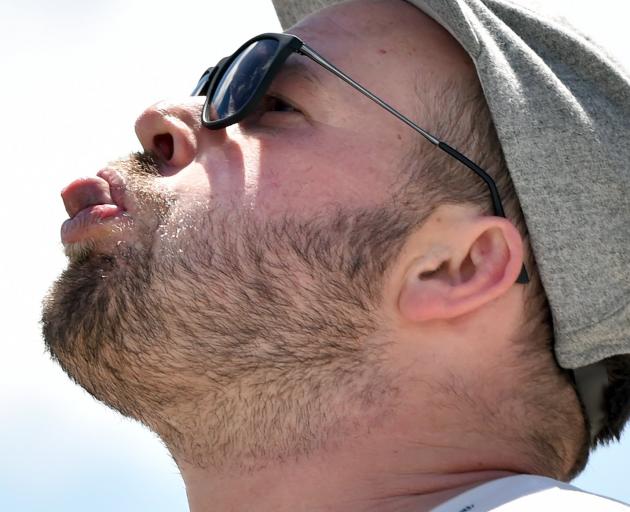 Tui Smith, of Dunedin, spitting his way to retaining his title as New Zealand cherry stone spitting champion in Cromwell yesterday.
To attempt the record, the Dunedin nurse chomped through cherries to reload with pits multiple times, despite his first spit of 13.1m being his best - enough to clinch the title, but not the record.

His nearest rival was Duncan Faulkner, of Cromwell, with a spit of 12.7m.

Competitors load with three stones having first eaten the cherries, and for Mr Smith that meant spitting multiple rounds.

"I was keen to take Aaron’s record but maybe next year." 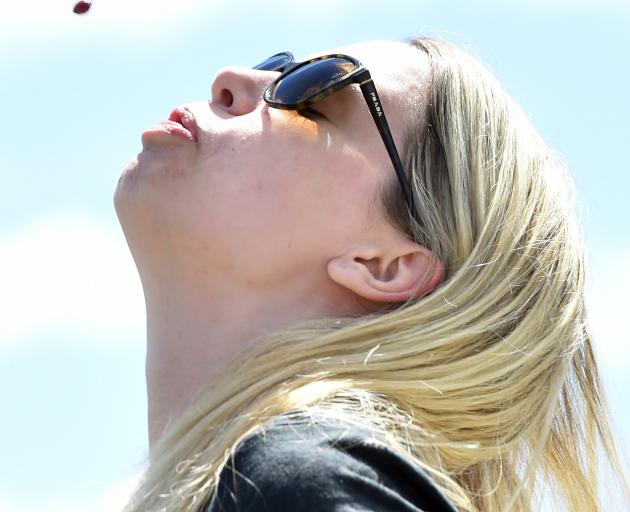 Also setting their stones skywards are Kate Dowson, of Auckland...
While last year he had been a novice, practising only on the morning of the championship, he admitted he had put in a little more effort to defend his title.

"I had a bit more practice this year, especially now my hidden talent is known."

About 200 people gathered yesterday outside Forage Cafe and Information Centre, part of The Gate complex, to watch the action.

There were four groups - 6 and under, junior male and female (under-16), and the men’s and women’s competitions - and the format was pared back on previous years due to Covid-19 requirements including vaccination passports. 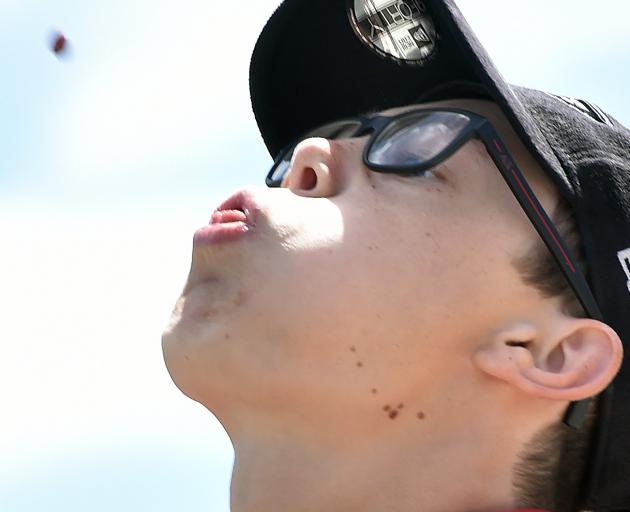 ...Ruald Raath (17), of Edendale...
Where Mr Smith was determined, other competitors were more relaxed when it came to competition, and like at all sports events the banter from the crowd was telling.

"She’s eaten 14 bags of cherries in the past two days," one man said of his daughter.

A woman said the starting block from where competitors launched pits on to the 20m-long competition mat was daunting.

"It’s quite intimidating and lonely up there." 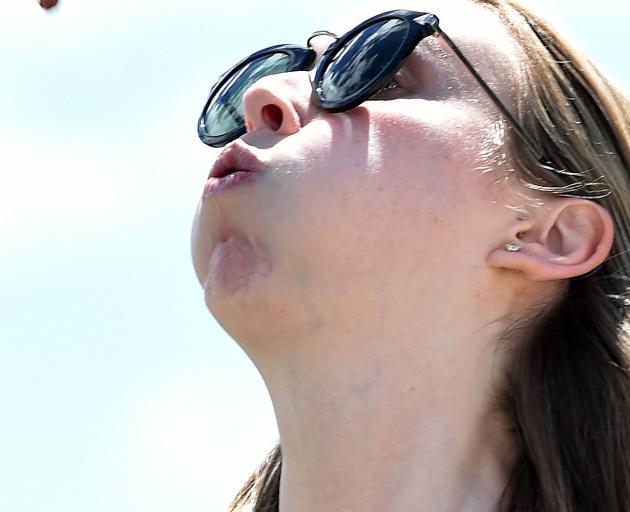 ...and Kathryn Luxton, of Auckland.
Another woman speculated on the role genetics played in a successful spitter’s ability to roll their tongue.

Cromwell Promotions Group marketing and communications manager Marion Low said the scaled-back event was a reality in the Covid-19 environment, meaning all that was left of the annual Cromwell Cherry Festival this year was its centrepiece event.

It was the partnership with The Gate and holding the event there, rather than at its usual home on the McNulty House lawn in the town’s historic precinct, that had allowed the event to go ahead, she said.

The event had been running in Cromwell since 2006, but the national championship had been around longer than that.