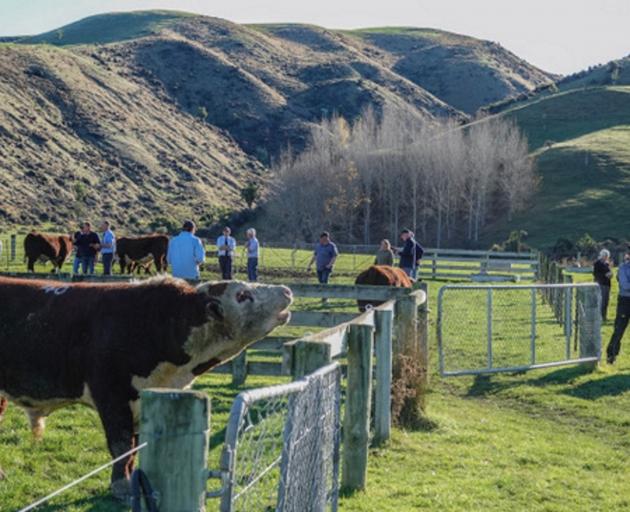 Grassmere Herefords’ bulls go under the hammer at an on-farm bull sale held near Cheviot on June 10. PHOTO: SUPPLIED BY THE JEFFRIES FAMILY.
North Canterbury’s drought has taken its toll, and prices were down at the first bull sales in the district.

Prices at the annual Richon/Beechwood/Woodburn on-farm sale at Balcairn, near Amberley, and the Grassmere/RiverlandsJ/Capethorne sale held near Cheviot, were well down on recent years.

Richon Hereford stud owner Rob Stokes said the combination of an uncertain market and the recent drought appeared to have had an impact.

‘I can’t nail exactly what it is, but we just didn’t have the under-bidders on the day. Everyone’s bulls have come through the drought pretty well, but you just never know with bull sales,’’ he said.

"It was good last year, but the calf market was also strong. Whereas it’s a different market this year with a bit of uncertainty. Sheep are doing all right, but beef needs to pick up.’’

The top price for a Richon bull was $6000, with "a few passes’’, while the Burrows family’s Beechwood Hereford stud topped the sale with $10,000.

Richon and Beechwood were forced to withdraw their Hereford cows from the sale after the recent flood event damaged roads and bridges, restricting access to the Stokes family’s Lees Valley property, near Oxford.

Just up the road at Domett, near Cheviot, Grassmere Herefords sold 11 of its 16 Hereford bulls for an average price of $6545.

The Jeffries family topped the sale with $12,000 for a Hereford bull sold to Beckenham Hills, of Cheviot, but had better luck with their Riverlands J Angus bulls, selling all 14 Angus bulls offered for an average price of $8095.