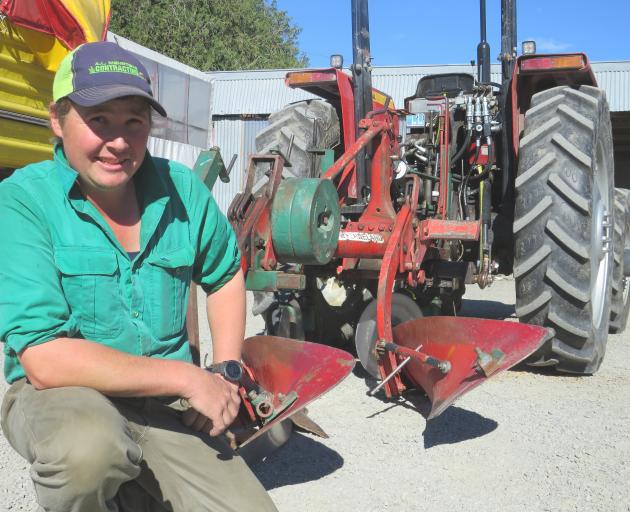 The Highbank, Methven, man placed 11th in the Silver Plough conventional class and unexpectedly earned the Fairhall trophy, an accolade for the highest placed competitor who has never before placed in the top five of competition up to and including the national championships.

Ridge (30) only took up the sport three years ago. He was chuffed with the trophy.

It showed he was getting somewhere, was "on the right furrow" as it were.

The former Methven Young Farmer started after attending a ploughing muster being held to encourage people in to the sport.

He quite liked it.

"It was more complicated than I thought it was going to be," he said.

He has picked up the mantle from his grandfather, the late John Ridge, who was a keen vintage ploughman and even hosted the New Zealand ploughing championships on Greenfields Farm at Highbank in 1996.

The farm, which runs sheep, potatoes and arable crops, was also used for the World Ploughing Championships in 2010, although Ridge’s grandfather never got to see them. They were hosted by his sons, Brian, Peter and Ian (Ridge’s father).

The family farm is where Ridge now works as a labourer; it was taken on by the brothers and now has a few of the next generation of Ridges working alongside them.

Ridge first competed in a ploughing championship event on Wilkinson’s Farm at Chertsey in 2019. He was competing in the Young Farmer section and allowed guidance from a mentor. He went on to win the class.

He has since competed around the district and recently at Kirwee and Oxford.

"Every [match] condition is different, you have to get the right setting or the soil is not going to do the right thing," he said.

And there is no shortage of ploughmen who are keen to pass on their knowledge.

"There are no cliquey groups, everyone is out to make everyone better," he said.

He admits he also likes to see straight lines.

Ridge and his biggest supporters, wife Kelsie and their two young children, travelled south to Riversdale in Southland for the championships earlier this month.

They transported his Massey Ferguson 390 and 1980 Kverneland plough down to the event for what was meant to be part of a relaxing week-long family holiday.

"There were two days of practice and two days of competition and by the end of each day I was knackered," he said, of the required concentration levels.

"Not running out of time but not going too fast to forget to do something," he said.

"It was anything but a holiday," he said.