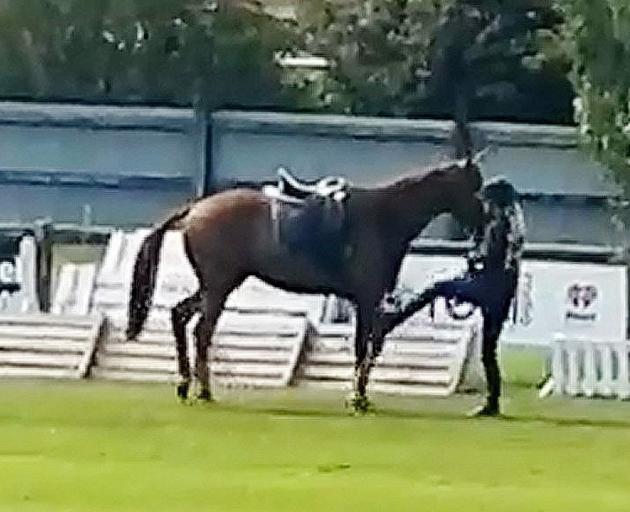 Still from video of horse abuse at North Otago A&P Show. PHOTO: SUPPLIED
Multiple investigations have been launched after footage of an equestrian event rider repeatedly kicking and hitting a horse in Oamaru on Friday was posted online.

The video shared on social media shows a woman beating a horse for about a minute before a North Otago A&P Show committee member intervenes. It is understood to have been filmed in Oamaru on Friday afternoon, the day before the A&P Show started.

The Ministry for Primary Industry (MPI) is investigating the incident, but was unable to provide a comment yesterday.

Meanwhile, the Royal Agricultural Society, which is the national body for A&P shows, said it was extremely concerned by the footage and said its resolution process also required the incident be fully investigated.

President Rachel Walker said while the matter was being managed by the North Otago A&P Show’s leadership, she had shared the executive’s serious concerns regarding the situation and offered their support.

She was aware of social media commentary around the incident and said it was important people allowed the resolution process to play out.

"While we appreciate the distress and serious concern being shared by many, we don’t not support any personal or pointed attacks that may cause harm — whether physical or otherwise — to the woman in the video."

SPCA national inspectorate manager Alan Wilson said the animal welfare organisation was ready to assist MPI with any investigation should it be called upon.

"SPCA was shocked by the behaviour displayed in this video and on the face of it, this may be a breach to the Animal Welfare Act," Mr Wilson said.

The incident came only weeks after New Zealand Olympic equestrian champion Sir Mark Todd received international condemnation when a video emerged showing him striking a horse with a branch.

SAFE spokesman Will Appelbe said whether someone was "world-famous or an unknown", there was no excuse for beating an animal.

Mr Appelbe said the actions of the rider in Oamaru were disgraceful, and called on authorities to "immediately" investigate the incident and take appropriate action.

"After the swift condemnation of Mark Todd’s treatment of horse recently, these horse riders should know better.

"It’s completely unacceptable to treat horses like this, and we’re seriously concerned that this behaviour could be more widespread."

Multiple attempts to contact the rider have been unsuccessful.