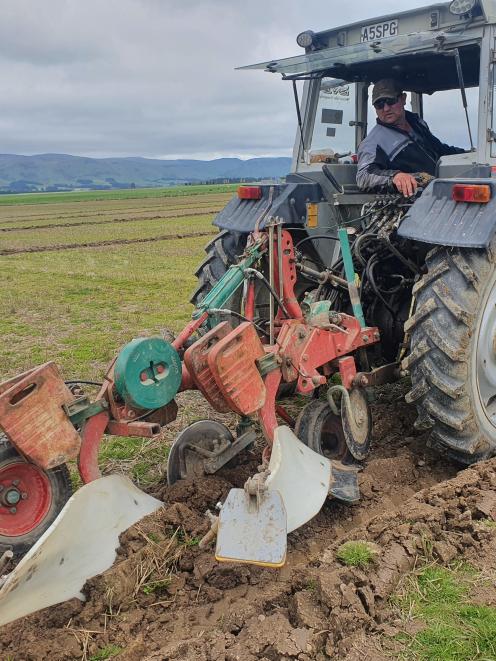 The New Zealand Ploughing Championships will be held on Mark and Sonia Dillon’s property in Riversdale from April 7 to 11. Mr Dillon, pictured ploughing at last year’s Waimea Plains Ploughing Association competition, will be competing in the conventional section. PHOTO: SONIA DILLON
Mark Dillon has spent nearly four years preparing paddocks on his Riversdale sheep, beef and cropping farm, to ensure they are level, consistent and just right — so they can be churned up again.

He and his club, the Waimea Plains Ploughing Association, are hosting this year’s New Zealand Ploughing Championships on his farm from April 7 to 11.

Nearly 40 competitors, who qualified at the reversible, conventional, vintage and horse competitions throughout the country, will arrive in Riversdale for practice days on the Wednesday and Thursday.

Following the traditional church service to rededicate the trophies at the Riversdale Community Centre on Friday (April 9), plots will be drawn and then the competition starts.

He won the 2013 national competition and represented New Zealand at the World Championships in France in 2014.

He and wife, Sonia, are fodder beet harvesting contractors and she and their children and his parents form the cheering section.

This year’s winners will represent New Zealand in Russia in 2022.