President without a show 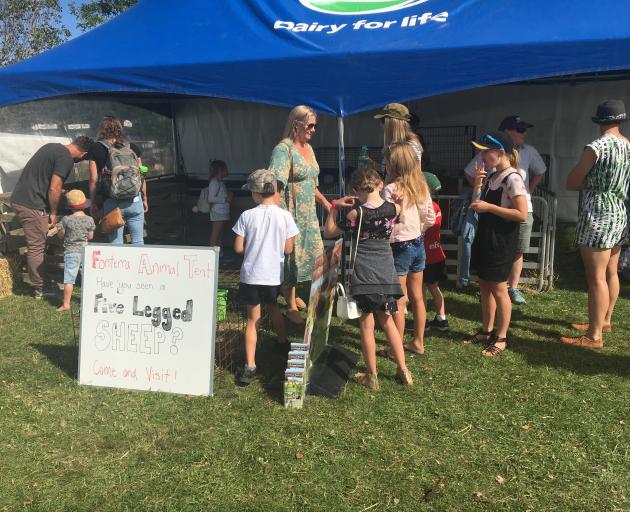 A five-legged sheep attracted plenty of attention at the 2020 Amuri A&P Show’s farmyard nursery. This year’s show has been cancelled. PHOTO: CRL FILES
Frank Macfarlane is a president without a show.

The Rotherham farmer and his wife Ginny were gearing up to preside over the Amuri A&P Show at the Rotherham Showgrounds on Saturday, until Omicron got in the way.

"It’s an excellent community and the Amuri show is the main event for the whole area, so it’s gutting to cancel.

"We weren’t going to call it off. We waited until we had no choice."

The move to the Covid-19 Red traffic light setting made it impossible to hold the show, with a 100 person attendance limit.

It is the second year in a row the show has been cancelled, with last year’s show cancelled after the region was plunged into Alert Level 2 just a week before show day.

On that occasion, the region returned to Level 1 the day following show day, allowing a community fun day to be held in lieu of the show.

But with daily case numbers in the high thousands, it is unlikely the show committee will get any reprieve this year.

"We would like to thank our committee and especially our secretary Kim Balcombe. She puts a tremendous amount of work in," Frank said.

While the show has been cancelled, work continues and the grounds still need to be maintained.

Frank would like pay tribute to his uncle and long-serving grounds keeper Duncan Macfarlane, who is his 80s and is set to retire.

The Macfarlanes have been farming in North Canterbury since the 1850s, moving to the Amuri Basin in the 1880s.

They made the switch from Corriedale sheep 10 years in a bid to produce more and better quality lambs and "to remain profitable".

Ginny is a primary school teacher at Rotherham School. she has taught there since the 1990s and served as principal for nine years.

She now teaches at Waiau School.

Secretary to stay another year

Amuri’s A&P show secretary plans to stick around for another year, after the show was cancelled due to Covid-19 for the second year in a row.

Kim Balcombe was "thrown in the deep end" for the 2020 show, but the success of that show convinced her to do another year.

Two years on, Kim is yet to experience the buzz of a second show as secretary.

"That first year, I thought, ‘What the hell have I done. I don’t want to do it again’," she recalls.

"I remember my first show, we got to the Thursday before the show and I saw it all coming together and thought ‘This is really neat’.

"So I’m hanging on in the hope that I will get to experience that feeling again."

While that first show took a lot of work, Kim says she put some processes in place to make the job a little easier next time.

She says juggling a day job with being show secretary is not easy.

"Having a day job means I’m spending my evenings doing work on it and I devote one day each weekend to show work.

She says the decision to cancel the show was not an easy one.

"It’s the one thing in the area, the one community-based event that everybody goes to, so it’s a real shame not to have it."

Last year’s show was replaced by a community fun day when the region returned to Alert Level 1.

But with the Red traffic light setting no event is being planned this year.