Proud to have won supreme sheep 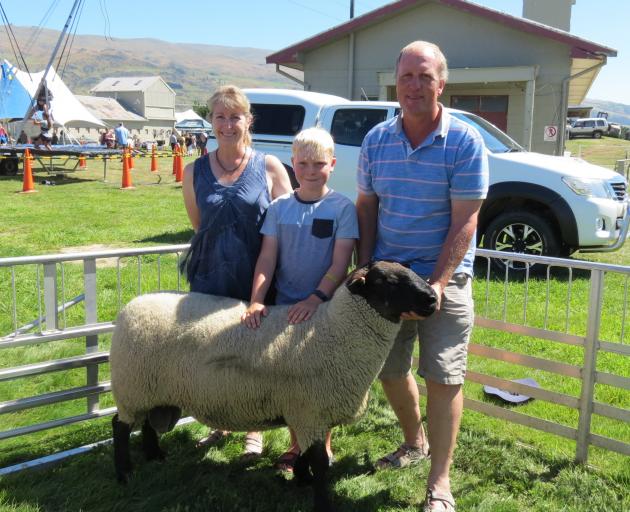 The couple own the Mt Annan Suffolk Stud at Waikoikoi, and have been breeding Suffolks for many years.

They have also had a Southdown stud for 15 years, and are trialling two Beltex rams.

Three months ago they bought a Suffolk ram 114/19 from Symon Howard, of Lawrence, which has been winning titles at the region’s A&P shows.

It won the supreme sheep of the show at the Mt Benger A&P Show last month, along with the same title at the West Otago A&P Show in Tapanui in November.

Mr McCall is the fifth generation on the farm and son Flynn (10), is the sixth.

They have 240ha and run 2400 ewes, including 1000 stud Suffolk and Suftex ewes and 100 Southdown stud ewes, with the balance of commercial ewes.

Each of the new rams features in the top 10 SIL rankings, Mrs McCall said.

"We are quite passionate about their figures.

"Their conformation, do-ability and survivability have to match their SIL figures and when we sell to clients, they will come back to us as their lambs match their ratings."

It is in its fourth year and the progeny of 40 rams are tested to see how closely an animal’s DNA profile matches its performance in real life, including animals’ eating qualities.

He is a life member of the Waikoikoi Cricket Club and this is the first year he had not played the game, preferring to show instead.

However, golf features strongly in winter.

A trained secondary school teacher, Mrs McCall is the general manager of Hockey Southland, and it is a sport she has played and is passionate about since she was young.

She also coaches and likes to see parents volunteering and becoming more involved in the sport to help their children get the most out of it.

The family was there to see it place second at Invercargill last week.