Groundswell's "Mother of All Protests" kicked off all around the country this afternoon.

Several towns throughout the South had protests of varying size.

Groundswell NZ co-founder Bryce McKenzie, of Tapanui, said the protest would take place in about 70 towns and cities across New Zealand.

A procession of vehicles make their way down the main street of Gore today. Photo: Stephen Jaquiery

It is the successor to July’s "Howl of a Protest", which led to large gatherings in most centres nationwide to oppose what Groundswell sees as overregulation of the rural sector by the Government.

Tractors and cars slowed down traffic on Dunedin's motorway as the procession headed towards the city.

A parade of tractors, utes, and other farm vehicles travelled into the Octagon, driving laps and honking their horns.

One ute sported a sign that said "our ute is our workhorse, not a toy of masculinity", while a truck had a banner that read "pig farmers thrilled vegans decide our future, yeah right".

A statement from the national organisers that was broadcast on the radio was played on loudspeakers for those in the Octagon to listen to.

Local organiser Lucy Thomson said she was very pleased with the amount of farmers that turned out for the protest, especially seeing as November was one of the busiest times of the year for them.

Not even red traffic lights on the main streets of Invercargill, could stop farmers and members of the public from making a stand, as a part of the Groundswell Protest.

Hundreds of protestors showed their support by driving from Dee Street to Gala St.

There were plenty of toots from drivers and cheering from bystanders as farm utes, tractors and a traction steam engine made their way through the streets.

Organiser Bruce Robertson said he felt proud to see the turn-out of supporters, both urban and rural.

"It’s in moments like these, that I feel proud to be a New Zealander."

From the amount of farmers who supported the protest it was clear the government’s regulations were unworkable, he said.

"This is us uniting against policies such as the 3 water reforms, the ute tax, the water tax and just a combination of things.

"This is us standing up for our rights and making it count."

Gore's Main St was also flooded by a stream of tractors, trucks and cars.

In Oamaru Thames Highway and Thames St was completely backed up with hundreds, if not thousands, of tractors, utes, cars, sprayers and old fire trucks heading down the centre of town protesting against what they were saying were unworkable regulations. 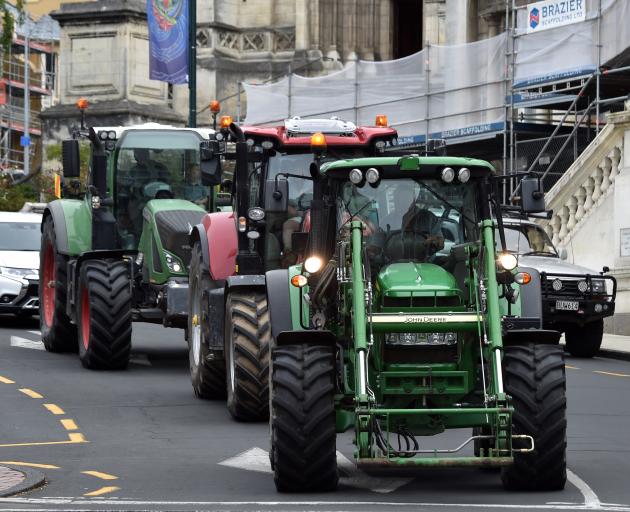 The Groundswell Farmers protest in the Octagon with their Tractors. Photo: Peter McIntosh

Plenty were filled with signs about three waters and many were tooting in support. Some supporters were on the streets too, with signs saying “urban and rural need consultation not legislation”.

About 70 vehicles and four tractors congregated at Woolshed Rd near Hanley's Farm in Queenstown in support of the movement.

The group drove the 15km to the Queenstown town centre, travelling down the main street, turning around at the bottom of Fernhill and dispersing thereafter.

He said regulations were "unworkable" and "nobody is against change", but there needed to be more consultation.

"This just doesn't affect our rural people, this affects all of New Zealanders."

Groundswell leader Laurie Paterson said at least 300 people had pre-registered for the protest in Gore, but there were far more  present.

“If there wasn’t a thousand people driving around I’d have been surprised.”

Fellow leader Bryce McKenzie said it was good to see the high level of support from the community.

“Certainly in Gore it’s been a great success,” he said.

The protest followed a circuit through Gore, from Broughton St at the south end of town, along Main St and up Hokonui Dr as far as the Croydon Hotel.

Vehicles ranged from utes and cars to tractors and trucks. Some displayed signs with various messages in opposition to government decisions which included the Three Waters reform and methane regulations.

Locals lined the streets to observe or support the protest.

Police were present and the protest was peaceful.

Vehicles on the main street were adorned with signs such as "Steal our water at your peril", "a real leader would listen to her people" and "be kind to farmers".

Timaru locals stood with signs along the street and were greeted with horns from the utes and tractors.

Timaru District Mayor Nigel Bowen stood with the protestors at the top of Stafford St. He said he was standing very much in solidarity of the Groundswell protest.

In a statement on Newstalk ZB this afternoon, the Groundswell organisation said Covid-19 had been tough enough on both rural and urban, with unworkable regulations adding to people's worries and frustrations.

"We, the people of New Zealand want an end to these regulations until genuine consultation takes place that treats all New Zealand citizens in a fair and equal manner resolving in acceptable resolutions for all.

"If the Government is not forthcoming in addressing these issues, I call on all New Zealanders to join our protest in Wellington in February next year. We say 'enough is enough' and ask all participants to disperse and go home in a peaceful manner," the statement said.