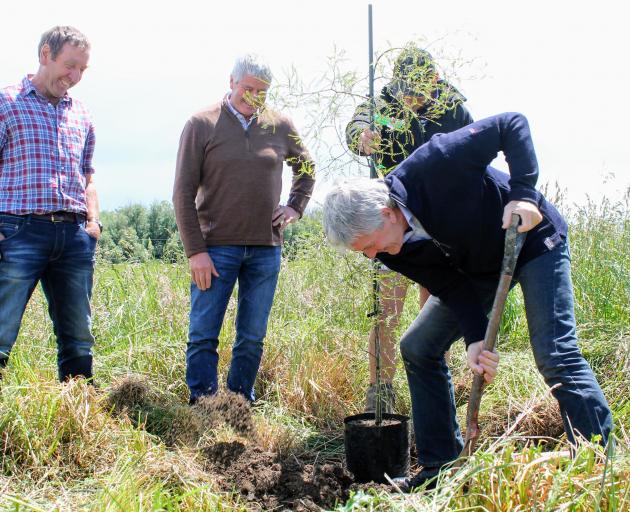 Agriculture Minister Damien O’Connor plants a tree to celebrate the Government’s investment in the Thriving Southland programme, watched by (from left) farmers Laurie Selbie, Ewen Mathieson and Rob Selbie. PHOTO: LUISA GIRAO
The Government is investing up to $9 million in a project to help Southland farmers use their land more sustainably.

The project would help farmers and growers - from Southland’s 21 river catchment groups - to make the changes required to lift their environmental sustainability.

He said central government’s $6 million to $9 million package acknowledged "all good work the farmers are doing".

"They [Thriving Southland] are building co-ordination and support for catchment groups but they need resources to do it. It can be to pay a co-ordinator, bring some experts or just facilitate events where they can share the best practice."

"It is not just about water [quality] - it’s about management and productivity."

Thriving Southland chairman Ewen Mathieson explained the the project had a timeframe of five years during which it would work as an enabler to farmers be able to share tools and knowledge.

"We will be encourage and help farmers and some catchment groups where we can ... but we will really co-ordinate everything and be the link between.’’

He said the team was still working in the programme and details would be released soon.

"It is important so we can get the farmer managing for themselves - in a certain extent - rather than be told what to do, being policed all the time. Farmers can actually make their own decision and then get feedback from the ministry and Environment Southland."

Thriving Southland would interact with communities from Te Anau and Tuatapere in the West to Gore and Waikawa in the South East, incorporating the Waiau, Aparima, Oreti and Mataura Rivers along with many smaller river catchments.