A South Otago beekeeper is enjoying a sweet buzz after flying high at the country's top honey awards.

Allen McCaw, of Milburn Apiaries near Milton, received the Supreme Award at the ApiNZ National Honey Competition in Rotorua recently, after hauling in two golds, a silver and a bronze medal for his creamed honey entries.

Although he and wife Maria were now working towards retirement, he still enjoyed competing with the honey from his ''cottage'' factory to the rear of the couple's 6.5ha smallholding on State Highway 1, Mr McCaw (69) said.

''We used to own Otago Honey Products and produce 30-40 tonnes a year, mostly into the domestic market. But we sold that off in 2016 and now we just run our little roadside stall, and process other people's production.'' 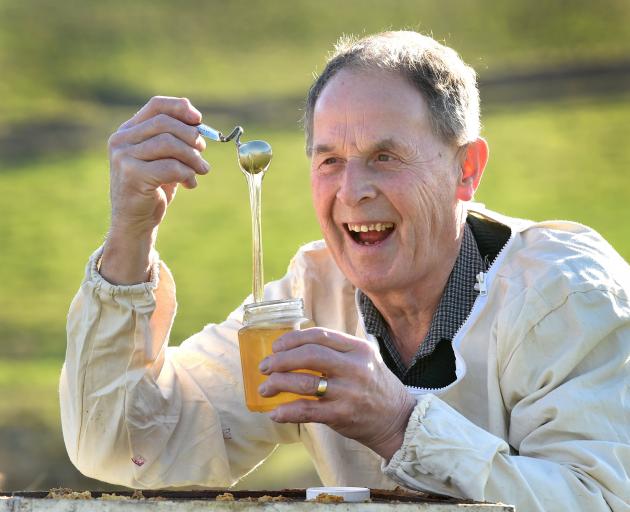 Beekeeper Allen McCaw, of Milburn Apiaries, says the secret of his ApiNZ Supreme Award-winning honey lies in the science. Photo: Peter McIntosh
Mr McCaw is no stranger to success, having won at least one gold medal every year except one since the national competition began in 2010.

The secret, he said, was in the quality of the creaming.

''Flavour is important, but what the judges are looking for is a swirling, pearly consistency and appearance - a bit like expensive shampoo - and that's where skill, experience and science come into it.''

Creaming was a natural process of ''granulation'', although it was easy to get it wrong.

''You might have noticed liquid honey, when left, develops sugar crystals after time. That's wholly natural in what is a super-saturated sugar solution. Creaming is just speeding that process up, but with a very fine crystal seed grain to ensure smoothness.''

Temperature control, absence of contamination and long experience of careful mixing practices were all key in making a high-quality end product - a process which took about three days, he said.

Although liquid honey predominated elsewhere in the world, creamed product was the norm in New Zealand.

''I'm always surprised there's not so much creamed honey abroad, because it behaves better on toast and leaves children's fingers less sticky, so mothers prefer it.

''Plus you can get more of it on the toast, which consumers and manufacturers both like.''

Almost all varietals could be creamed, although some were better suited to it than others.

''Clover honey is the classic for creaming, but something like viper's bugloss has too high a ratio of fructose to glucose, and tends to crystallise.''

About 1000 people attended the recent North Island conference and competition, of whom about 70% were beekeepers, Mr McCaw said.

Competition was usually friendly, although not without the occasional sting in the tail.

''At the end of the day everyone wants the best honey. Just like the bees.''