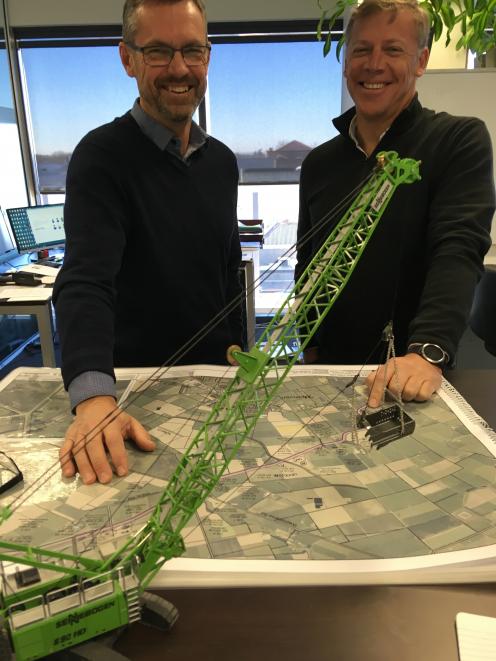 The 54-year-old finished in the Ashburton-based office late last month.

''I've done my dash,'' he said, during the end of a week-long handover to interim chief executive Tony McCormick.

''I think getting the Klondyke [storage] suite of resource consents over the line, bar one appeal, was a good culmination point for me.''

The opportunity came up at McGrath Nurseries and would place him and wife Tracy closer to family, he said.

Their three adult children were now based in the North Island, and his wife's family were from Tauranga, just across the Kaimais, he said.

There had been ''a constant stream of challenges and I've thoroughly enjoyed it,'' Mr Curry, who started with RDRML in December 2007, said.

Dealing with shareholders with differing views on water and its use were not always compatible, and at times water was a contentious issue - especially when added to the mix was the Ashburton water zone committee, of which Mr Curry was a committee member, local iwi, central and local government.

Even working with fellow Mid Canterbury water scheme company BCI over a water swap arrangement ''negotiations got easier, but it was tough''.

While Mr Curry may not have filled his mandate to ''combine all the irrigation schemes under one and bring them into the RDR'', the professionalism of irrigation schemes nutrient management was second to none and started by RDR, he said.

Even after 11 and a-half years, Mr Curry was still fascinated by the engineering feat of the 67km RDR structure and rattled off facts and figures of significance.

'''I have to pay homage to those who had the foresight to set this thing up.

''It is a remarkable feat of engineering skill, done before GPS and without modern surveying skills.''

The RDR was an ''engineering marvel that many in Mid Canterbury don't appreciate,'' he said.

''Seventy years later it's still doing what it was built to do.''

Mr Curry will leave behind projects he has lined up, and pushed for, including a state-of-the-art fish screen, given the go-ahead to replace an out-of-date bio acoustic fish fence system.

It is a significant investment costing $10million to $15million.

''Water is a vital resource. It needs to be looked after ... cherished. Access is not a right, but you have to look after it as best as you can, and that includes everything in it,'' he said.

There was a lot of land in the district being used for on-farm storage ponds.

And on farm that meant two, three or four hectares of fertile land being used just to hold water, he said.

Ongoing environmental issues to increase the flow of the Ashburton River will cause a reduction in water supply for the RDR.

Plans for a dam at Blowing Point, in the Ashburton Gorge, fell over and since then there had not been the vision or foresight to build a dam [on the Ashburton River], Mr Curry said.

''It costs a lot of money but if you want to have water for agriculture, reliability of supply is fundamental and in order to continue that, the best solution is some storage ...

''But trying to get everybody pointing in the same direction is a challenge''.

He knows the district, knows the issues and the importance of water to Mid Canterbury.

He is also looking forward to implementing some of the ''amazing'' projects set up by Mr Curry in his 11-plus years in the role.

Among them is the installation of a multimillion-dollar fish screen at the top of the RDR's water way, estimated to cost $10million to $15million.

Mr McCormick has an engineering background and was former chief executive of Opuha Water, South Canterbury.