About 50 people, mostly fencing contractors and their staff, attended a day in Palmerston last week.

The theme was fencing on a contour and included topics such as setting strainers and hanging gates on an incline.

"We are not here to tell a fencer how to do their job but we present them with two or three different ideas." 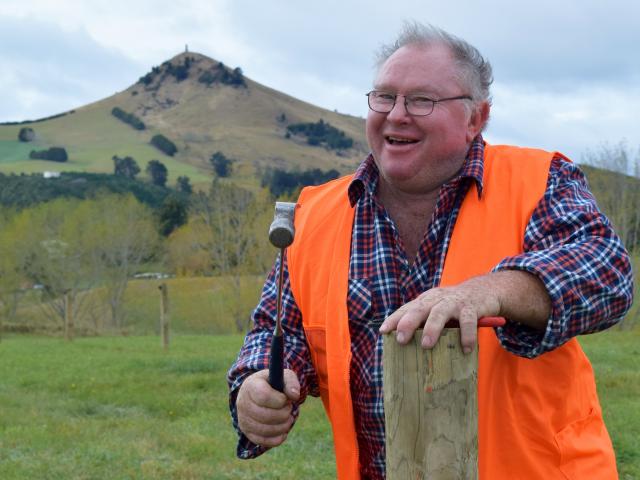 Fencing Contractors Association New Zealand board member Stephen Mee, of Winton, swings a hammer at a fencing best practice trade day in Palmerston a week ago.
The event allowed people in the industry to network, he said.

The "trouble" with fencing contractors was they did not share knowledge locally, missing opportunities to learn.

"But they’ll quite happily talk to another fencing contractor outside their area."

Demonstrations on the day included health and safety fundamentals including tool and equipment checks.

Horror stories of accidents were shared including an oil reservoir on a rock drill killing its operator and how a loose packet of staples in a tractor cab jammed the accelerator, sending the tractor and its driver down a cliff.

Fencing was among the industries at the top of the list for having the most work-related injury claims accepted by the Accident Compensation Corporation.

If a fencer felt unsafe on the job, they must not attempt a duty.

"If you’re not happy going up a steep hill — don’t. Tell the boss and he can deal with it."

A boss would prefer a staff member highlight the risk and get a day behind on the job, than have an accident and get weeks behind because a site has been locked down.

He employed two staff at his fencing business Stephen Mee Contracting, which was "flat out".

"We’ll be busy through to August without even trying."

The association was lobbying the Government to legislate for its departments, such as Department of Conservation and Landcorp Farming to contract only accredited fencers "to weed out the cowboys".

"So they know the quality they are going to get is top-notch".

Accreditation could be achieved by gaining a New Zealand Certificate in Fencing (Level 3), which tertiary education provider Northtec offered anywhere in New Zealand.

Fencing had "become an expensive game" and a "cowboy" usually charged as much as the "good guys", such as association members.

If the fencing work of a member was "as rough as guts we are going to kick them out or we will try and rectify the situation".

The plan for the travelling roadshow was to stop in two southern locations next year — one stop would be Ranfurly and the other stop was pending.

"I haven’t decided yet — we are open to suggestions."