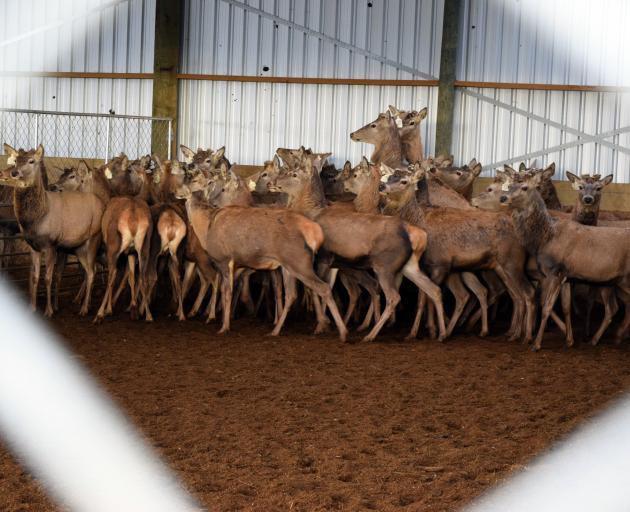 Stags in a winter barn on farm Top Deck Trading in Eastern Southland.
Deer are fussy eaters and must be served quality feed, farmers say.

The farmers talking about their systems — a mix of purpose-built barns and converted farm buildings — were John Somerville, of Pine Bush, Bruce Allan, Doug McCall, Tony Roberts and his daughter Kate, all of Eastern Southland, and Cam Nelson, of Winton.

About half the farm was used to run beef; the other half was a diverse deer system, producing venison, velvet and trophy fallow bucks.

Existing sheds on the farm were used to winter mixed-age hinds until October.

A purpose-built barn had been operational for about two years ago and was wintering about 190 stags this season.

The stags were fed up to three bales of quality baleage each morning using a Bale Buddy towed behind a tractor, Miss Roberts said.

Indoor wintering systems were a controlled environment with many benefits.

Knowing where their deer were at any time of winter gave farmers peace of mind, as did the ability to control the amount of feed the animals had and avoiding any environmental impact a deer could have on a muddy paddock.

Wintering the deer inside meant more pasture was available to "flush them up" in spring.

Mr Roberts said they had two self-feeding racks manufactured so a bale of baleage could be put in every second day for the hinds.

"They are bloody good ... they are the best thing we’ve done."

Serving quality feed in the racks was "paramount".

"If you get it right, they’ll clean it up and they are going to put weight on and be happy."

Deer were snackers so it was important feed was always available. 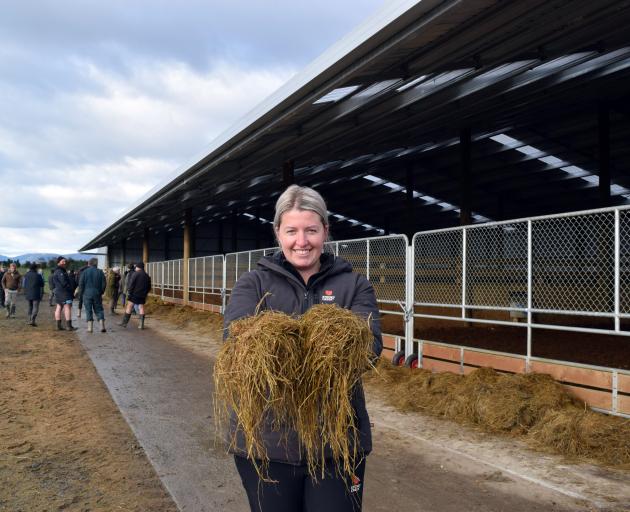 Top Deck Trading farm manager Kate Roberts shows the grass baleage she feeds to stags in a winter barn during a farm tour in Southland last week.
Mr Roberts got the idea for the "marvellous" rack system after seeing it in action on Mr McCall’s farm in Waikaka Valley.

Mr McCall said anyone considering getting racks made for weaner deer needed to have the bars spaced about 175mm apart — he knew, because his first model had wider gaps and "we had the odd weaner go missing up the road".

Extra metal had been welded on the rack to stop similar escapes.

Racks for feeding spikers and stags needed bigger gaps so the animals could feed.

He had always wintered fawns inside, firstly in a woolshed and then he converted a four-bay hay barn to a winter barn.

Deer usually stayed in the barns until mid-September but one season they were returned for a 10-day stay in November because the weather was "a bit hickory".

The barn system had expanded to include one featuring a polyvinyl chloride roof, which was in its third winter of use, housing about 190 weaner deer this season.

"The biggest challenge is that quality of feed — if it’s too dry they’ll pull it out and won’t eat it."

Some of their diet was supplemented with palm kernel and he was considering installing troughs to be able to feed deer nuts.

During lunch at Pete and Sharon McIntyre’s farm in Pukerau, AgResearch senior scientist David Stevens talked about research comparing the feed costs of the same five Southland deer farms wintering indoors in 2020 and 2022.

The feed costs per stock unit had fallen because the group had started as novices and had improved their systems on their way to becoming experts.

"That’s understanding the system, figuring out what you’re doing, mitigating or minimising the waste and know where to economise."

Stags in wintering barns ate about 75% of the dry matter they would if wintered on a crop outside, Dr Stevens said.

When feeding indoors it was important to ensure the diet was fit for purpose. 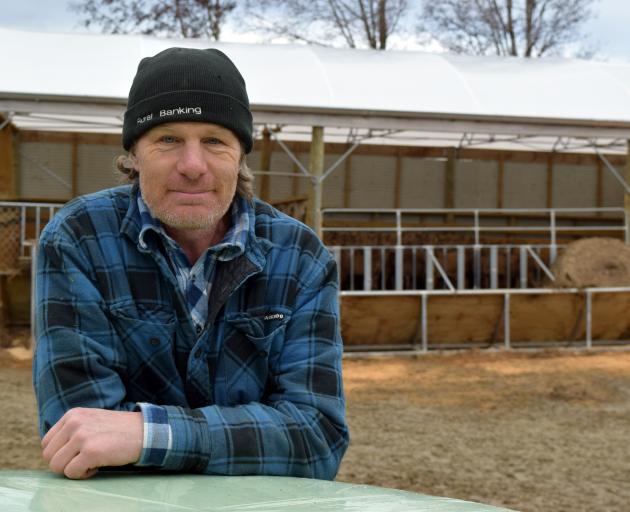 Deer farmer Doug McCall talked about his winter barn system, including his self-feeding racks, on a farm tour in Southland last week.
The diet needed to meet the physiological demands of the animal, such as maintenance, growth and pregnancy, and had to meet the farmer’s requirements to meet future production targets.

Farms using homegrown silage or baleage as the major source had the lowest feed costs.

Silage and baleage were of moderate quality. Often, if fed over long periods of time, they were only able to meet maintenance requirements.

Silage quality and intake was affected by how wet the crop was when made. Silage made in late spring generally had the highest quality, in summer the lowest and autumn was intermediate.

Baleage was often made later than silage, meaning there could be more seed head and dead material, lowering the overall quality. However, the higher dry matter and higher pH of baleage often meant the amount eaten by the deer was good.

If baleage was made without chopping, the long stem lengths could reduce the amount deer ate.

Silage and baleage needed some supplementation if production targets were more than maintenance.

Supplements were generally priced according to their relative quality and protein content.

Higher priced supplements, such as deer nuts, could be fed at lower levels to balance a diet.

Some diets could be low or high in various minerals and trace elements.

Generally, grains were low in calcium and should have calcium added if used as more than 30% of a diet.

Palm kernel was a relatively well-balanced feed of moderate quality and low cost and it was high in copper, which suits deer.

However the small size of palm kernel meant it had to be fed with an effective fibre source.

Bedding costs made up about a quarter of the total cost of the indoor systems, Dr Stevens said.

Bedding should be of a high standard because a warm, dry and comfortable animal ate less, fought less and was more settled, reducing bullying and potential animal health risks and costs.

The average total cost for running the system had remained about the same between 2020 and 2022, which was "not too bad considering all costs have gone up in that time".