In a win-win situation for both the council and a local nursery owner, baleage swept along by November's flood and strewn over a rural road for months is being turned into compost.

Trees of the World nursery owner Rodney Hogg said the baleage had been on Riverside Rd, near Allanton on the outskirts of Dunedin, for about two months.

It was ''extremely dangerous'' driving along the road, particularly at night, Mr Hogg said. 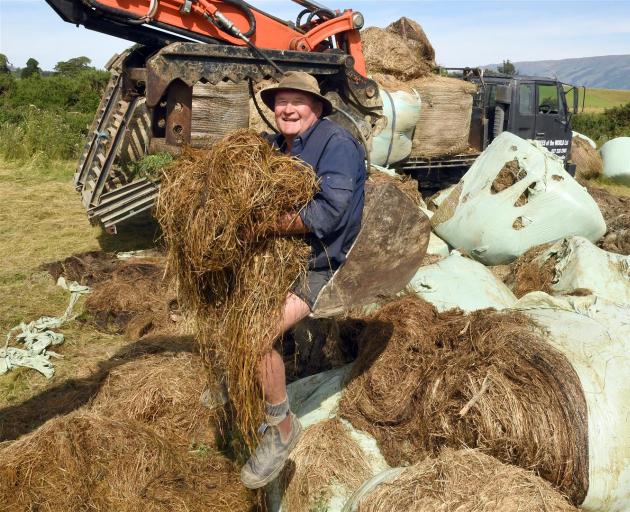 Nursery owner Rodney Hogg has been collecting baleage swept up in November's flood from the road and from farmers' paddocks. Photo: Stephen Jaquiery
About 20 bales were left on the road, and another 33 or so were caught up in the trees on the road's edge, he said.

After a few weeks of negotiations and health and safety concerns raised with the council, council staff agreed contractors would close the road and he could clear it for them - and keep the baleage for compost, Mr Hogg said.

It took him about six hours, with the help of a tractor and a couple of staff , he said.

''I didn't want the road closed for too long.''

He also retrieved about 50 unusable bales from farmers' paddocks, and had more than 100 in total. They would have cost more than $100 each to create, Mr Hogg said.

Fortunately his farm was on high ground, he said, and he felt sorry for the landowners in the area who were affected by the flood.

''The farmers just had such a dreadful time. They had to shift all their animals.

''Their paddocks were all ruined.''

Mr Hogg was pleased he was able to help, as the farmers were struggling to know what to do with the baleage themselves.

He had about 9000 trees at his nursery and the baleage was very welcome.

The compost he used, sold and delivered was made from organic materials. It took about three years to fully break down into compost.

Sawdust, animal and poultry manure, leaves, berries and ''all sorts of goodies'' went into the compost, as did seaweed and grain husks.

''It decays down, because you can't put it round the plants when it's hot.''

It was ''beautiful'' and ''full of worms'', and the baleage was a welcome addition to the recipe.