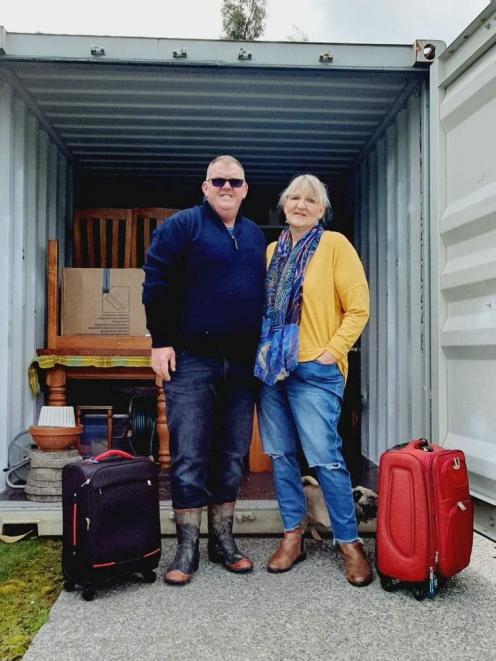 Chris and Saskia Trembath set off from Fielding in Manawatu to take over the Blacks Hotel at Ophir.PHOTO: SUPPLIED
From the Manawatu to Timbuktu ...

OK, Ophir is nowhere near Mali in West Africa, home of the medieval trading centre of Timbuktu.

But the Blacks Hotel is pretty remote by New Zealand standards and it does do a roaring trade on any given night.

It will be the new home of former Manawatu couple Saskia and Chris Trembath when they take over the pub in the coming weeks.

In transit when Southern Rural Life caught up with them last week, they had loaded the last of their gear from their Feilding house into a container and were hitting the road south for pastures green and adventures new.

They take over the hotel from the Stoddart family, in one of Central Otago’s most rural locations.

And they cannot wait.

For former dairy farmer and truckie Mr Trembath (50), it will fulfil a lifelong dream of being a chef.

‘‘When I left school I tried to get a chef’s apprenticeship.

‘‘But in those days you had to do it through a restaurant.’’

He could not get one in his hometown and moved to Auckland, he said.

He ended up moving back to the Manawatu and dairy farming for 25 years, which included a sharemilking stint in Nelson. For the past 10 years, he had been working in transport.

But the dream of being a chef and having a restaurant stuck.

Mrs Trembath (51) was born in Holland and came to New Zealand as a 12-year-old, and has spent much of her working life as a registered nurse, doing district nurse stints in remote Central North Island areas such as Waitomo and King Country.

She and her husband only got together a few years ago, although they had gone to the same high school in Feilding and met in biology class, 37 years ago.

‘‘Three years ago we started to think about what we could do but we couldn’t quite pull any of the ideas off,’’ Mrs Trembath said.

‘‘We bought a house in Feilding, but in February we came down to Queenstown and we realised how cool it [the area] was.”

‘‘We saw the [Blacks Hotel] property and we were just blown away,’’ Mr Trembath said.

The hotel, in owned by Sandy, Sam and their son Alex Stoddart and his fiancee Jaz Campbell for the past five years, has become renowned for its quirky decor, much of which will remain at the new owners’ request.

‘‘Yes, we were blown away. It’s quirky, and we loved the themes, and I kind of like that, it’s sort of my style,’’ Mrs Trembath said.

‘‘But we’ll mix it up with our own style to make it a bit more our own.

‘‘That has always been my dream to do something like this, and I’ve collected stuff for years.’’

Some of it was from the gold mining era, so it would all be right at home in Central Otago, she said.

‘‘As much as I’ve love nursing, I don’t like the management side, that has stopped it from being as much fun, but I love my patients.’’

She could imagine still keeping her eye in on the palliative side of care.

‘‘I’m also looking forward to getting into my art, because I hadn’t had the time to do that.’’

On a previous visit, they had met many of the Ophir-Omakau locals.

‘‘We met 50-odd people, and we had a ball. I was pretty blown away by how friendly they were. We felt very accepted, and we look forward to getting to know more people.’’

There will be a changeover period with the Stoddarts due to leave mid-October, with a leaving party scheduled on Saturday, October 2 from noon.