Warning: The above video may be disturbing for some viewers, we advise discretion.

A video has surfaced showing an equestrian event rider lashing out at a horse, including kicking and hitting it, as it backs up during an extended beating at the North Otago A&P Show, in Oamaru.

The video shared on social media shows a woman beating the horse for about a minute before a show committee member intervenes.

Show secretary Katrina Kelly said that the incident happened on Friday afternoon, before the show started.

The rider was allowed to participate in one event, before she was shown a yellow card and told she could not take part in the rest of the show.

"The North Otago A&P Show in no way condones the actions of this person," Mrs Kelly said.

Its committee was "disgusted" and had dealt with the incident.

The national Royal Agricultural Society had also been made aware of the incident.

Asked if the rider would face further disciplinary action, the national group’s head office said, "You will have to make contact with the association concerned, as to anything that happened at the show." 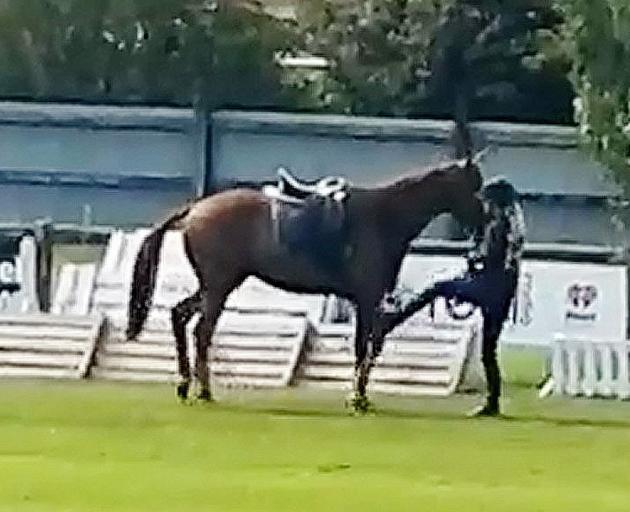 Stills from video footage appearing to show a rider repeatedly kicking and hitting her horse at the North Otago A&P Show in Oamaru on Friday. IMAGES: SUPPLIED
Mrs Kelly said it was heartbreaking the incident had occurred and a successful A&P show had been tarnished by it.

She declined to identify the rider.

The incident came only weeks after New Zealand Olympic equestrian champion Sir Mark Todd received international condemnation when a video emerged showing him striking a horse with a branch.

After that video emerged, from an eventing training session in Scotland in 2020, Sir Mark was handed an interim suspension by the British Horseracing Authority, and he apologised.

Sir Mark also stepped down as a patron of the World Horse Welfare charity.

However, he escaped prosecution under Scottish animal welfare law because incidents must be referred for prosecution within six months of their occurrence.