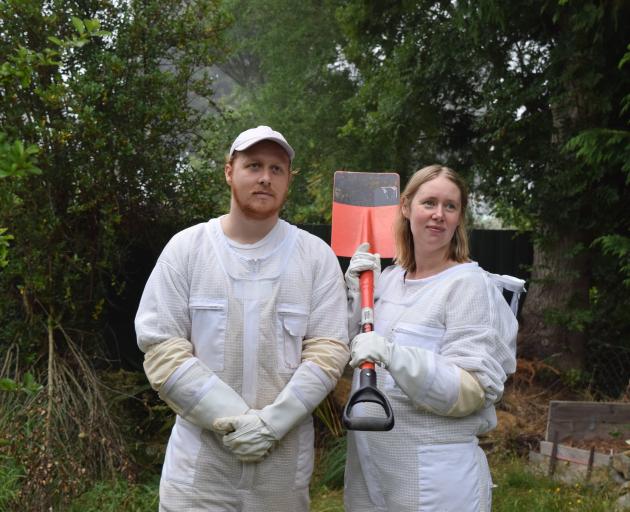 University of Otago genetics PhD students Josh Gilligan and Gemma McLaughlin prepare to remove a wasp nest from a compost heap in Dunedin last week. PHOTO: SHAWN MCAVINUE
Sting-riddled students are removing wasp nests in Dunedin for free to further their research to stop the invasive pests costing the economy more than $130million a year.

University of Otago genetics PhD students Gemma McLaughlin and Josh Gilligan, of Dunedin, have removed about 50 wasp nests in Dunedin since late 2018.

The wasps were being used to research how gene-editing could interrupt the pests’ reproductive cycle by stopping production of males, Mr Gilligan said.

It was frustrating that the Government’s Predator Free 2050 strategy identified wasps as pests but excluded gene-editing technologies.

The Government would lack political will to use gene editing to solve the problem until the public made it clear it supported the research.

Gene editing was the way forward and New Zealand was falling behind other nations in researching the science, he said.

Consequently, their research needed to progress "with the realm of the law", while they tried to convince authorities their research methods were safe.

A Department of Conservation report, "An Evaluation of the Costs of Pest Wasps in New Zealand", released in 2015, estimated the annual cost of wasps to the economy at $133million a year, affecting sectors including beekeeping, forestry and agriculture.

Wasps killed bees to eat their honey, killed chicks of native birds to feed to their larvae and spread viruses to other insects, Ms McLaughlin said.

Wasps could be poisoned but it could be difficult and costly to install bait stations in forests, she said.

The Vespex poison could not be dropped by helicopter because other animals would die after eating it.

Mr Gilligan said the German wasp entered New Zealand uninvited in the 1940s and the common wasp "snuck in" during the 1970s.

The wasps ran riot because they had no natural predators.

Removing a nest in the rain could be a challenge because more wasps were inside — sheltering from the rain rather than out foraging on a sunny day — and were "more aggressive" when disturbed.

"You try not to freak out because there are thousands of wasps trying to kill you."

Ms McLaughlin said the pair discovered "the hard way" they needed to wear denim jeans and jackets under their protective suits.

"Wasps can sting through the suits."