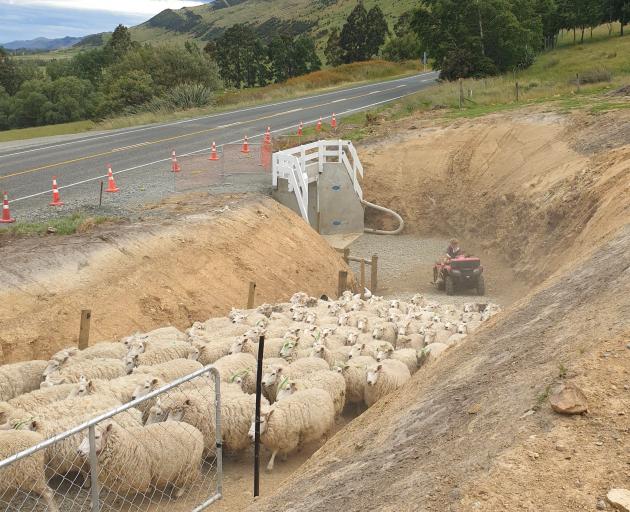 Fynn Mitchell moves a flock of sheep through a new underpass on his family farm near Lumsden. PHOTO: MICHELLE MITCHELL
The major investment of building a stock underpass is worth every cent to keep staff and stock safe, a Northern Southland sheep and beef farmer says.

State Highway 6 runs through the middle of the 500ha farm.

Stock had been traditionally moved between both sides of the farm by staff moving them along the highway, Mr Mitchell said.

Over the years, more traffic was using the 100kmh stretch of highway, which made it more difficult to get animals and staff safely across it.

About 4500 vehicles travelled on the stretch of highway each day and much of it was heavy traffic, Mr Mitchell said.

Building an underpass was a major investment, something he and his wife Michelle had "ummed and ahhed" over, but only one decision could be made.

"It had to happen — for a lot of reasons it needed to be done."

To build the underpass a section of the highway was closed for a weekend in November last year — from 7pm Friday to 7am Monday.

The underpass — which was 23m long and consisted of 13 precast concrete box units — had been working well since its debut last month, Mr Mitchell said.

Their children, Fynn (16), Maisie (14) and Tilly (13), were enjoying riding their horses through the underpass.

When asked if underpasses were robbing people of beautiful vistas of sheep being moved down a road, he replied:

"It’s too dangerous putting animals down the road and to put staff in that position."

A NZ Transport Agency spokeswoman said nearly 30 stock underpasses had been built in the South in the past five years.

About 10 of the underpasses were in Southland — one a year being built both in the Gore and the Southland District Council areas.

About 19 underpasses were built in Otago in the same time — more than one a year in Clutha, and about one a year in the Waitaki and Central Otago District Council areas.

The agency provided a subsidy of about $100,000 for the building of each underpass.

Subsidies varied slightly depending on how much traffic used the road but was usually about a quarter of the full cost of the underpass, she said.