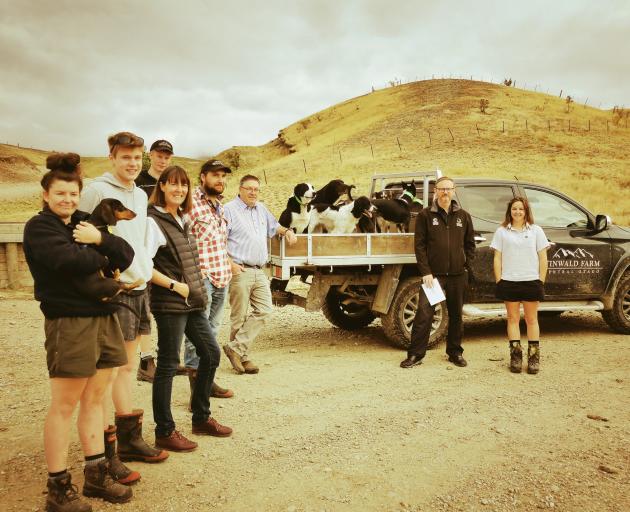 That is the belief of Amanda Currie who, with husband Adrian, owns Tinwald Farm in Central Otago which is opening its gates to students for practical, hands-on agricultural learning.

Recognising that farming courses could not be effectively delivered solely in a classroom, a memorandum of understanding was signed recently with Tinwald Farm, a 744ha property between Cromwell and Wanaka.

This year’s intake would spend more than half of their time at Tinwald Farm, where they would be engaged in everyday farm tasks that enabled them to meet academic requirements and gain the experiences and knowledge to allow them to step into employment.

"We are focused on increasing the opportunities for land-based learning. This means developing relationships with a number of farms and stations within the local farming community. It is vital to programme effectiveness as well as to student engagement and success," Central Campus head of college Kelly Gay said.

Tinwald Farm, which runs sheep and beef and also has 20ha of pinot noir grapes, was bought by Mr and Mrs Currie in 2012 and was initially largely a passive investment.

Mrs Currie had no farming background but, like many New Zealanders, grew up with aunts and uncles who were farming and visited them "from time to time".

Looking for an investment, the couple thought about buying a commercial building but decided they "couldn’t go out to it and have lunch" so they bought a farm instead.

Initially, they appointed some agri professionals to look after the property, including a farm manager, and they would visit about once a quarter. Over time, they came to learn a bit more about farming.

For someone not from a farming background, a few things started to weigh quite heavily on Mrs Currie, including the fact people often bought land with the hope it would increase in value and they sometimes ended up in lots of debt and were no longer in control of what happened on that property.

There were also "societal challenges" including people thinking the solution to climate change was to go vegan, along with issues around water quality, and the use of synthetic-based fertiliser. All of those factors resulted in her observation that farming was on a poorer and poorer reputation among the community as a whole, she said.

But Mrs Currie said she believed that farming was the most important profession in the world.

"It’s more important than any other profession because we grow the food that the rest of the of the community eats. We’ve got to grow that with an integrity and understanding of how important it is," she said.

At Tinwald Farm, regenerative agriculture was being embraced.

"We’ve got to do something that allows us to reduce our synthetic inputs, allows us to regenerate our soil . . . thinking the most important thing on your farm is the soil," she said.

She was keen to do whatever she could to encourage young people to be involved in "an agriculture of the future" and "ignite" their enthusiasm.

"We want them to feel really optimistic about the future. They are the potential solution to all manner of problems, including climate change. They’ve got to be educated and shown a way."

When the couple were approached by Otago Polytechnic, they thought "why would we not?" and being only 16km from the campus meant it was an ideal location