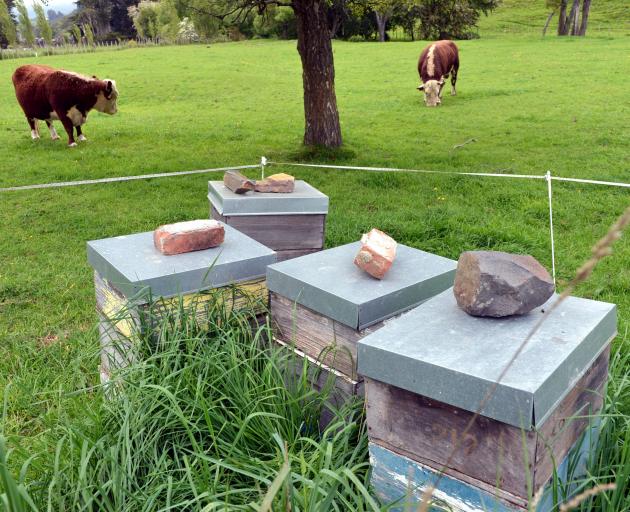 New Zealand beekeepers have been experiencing a softening in prices. Photo: Stephen Jaquiery
A market downturn has had a significant impact on the profitability of many beekeeping businesses and some rationalisation is expected over the next year, Apiculture New Zealand chief executive Karin Kos says.

Figures have been released on the 2017-18 honey season which showed honey volumes and hive yields were up by 35% and 21% respectively, while average honey prices were lower than the previous year for most types apart from monofloral manuka honey.

In a statement, Ms Kos said the softening of prices had come after more than 10 years of increasing value for the majority of all New Zealand honeys on the international market.

''Unfortunately, we are continuing to see falling prices and sluggish sales over the 2018-19 year as we compete with global honeys that typically sell for lower rates than our beekeepers have received over the last four to five seasons,'' she said.

While total registered hive numbers (up 11%) and registered beekeeping enterprises (up 9%) continued to increase over the 2017-18 years, it was unlikely that growth, particularly in the commercial sector, would continue, given current market conditions.

On the upside, the Ministry for Primary Industries' 2018 Apiculture Monitoring Programme Report highlighted the increased demand for pollination services with the expansion in several horticulture sectors including kiwifruit, apples, avocados, stonefruit and blueberries.

That was good news for the industry as it provided another source of income for beekeepers, Ms Kos said.

While the market had been challenging, honey export sales continued to rise with a 6% increase in 2017-18 to $348million, driven by both higher export volumes and prices. Export volumes to the United States rose sharply to eclipse China as the largest market.

There had been increasing interest in the US as a relatively new and growing market, particularly for New Zealand manuka honey, and that was reflected in the increased sales and retail presence there, Ms Kos said.

MPI's Situation and Outlook for Primary Industries report, released in March, said exports to the US slowed during 2018 after the highs of the second half of 2017 but were still higher than historic levels.

The strong increase in exports of honey to the US in the July to December 2017 period was likely due to initiatives by industry to establish new relationships with strategic retail partners.

Consequently, honey exports to the US were expected to grow in the future, albeit at slower rates, as those relationships continued to be developed.

Understanding the challenges of the honey market was among the topics to be discussed at Apiculture New Zealand's conference and trade exhibition in Rotorua next month.