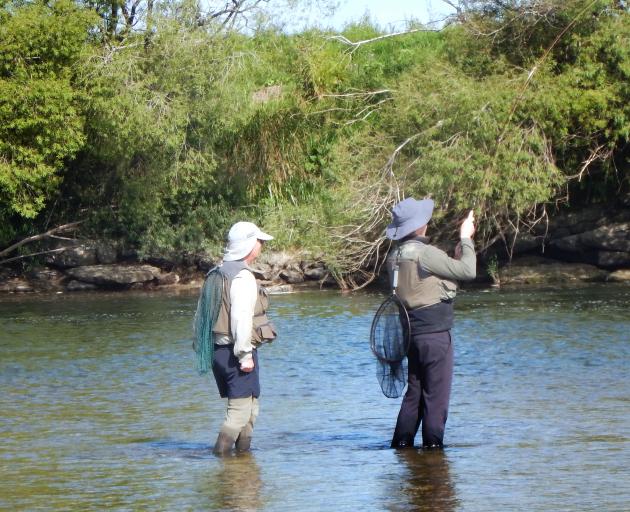 Chris Cowie on the SFFC course plays a trout on the Mataura while instructor Chris McDonald offers advice. Photo: Mike Weddell
Rivers and streams have continued to fall and warm up over the past week, despite some heavy showers in recent days.

Everywhere looks good for the weekend and rumour has it that the first few cicadas have emerged so the tussock lakes are worth a visit if the temperature is above 20degC.

In terms of river, the problem is which one to fish as they all look good. My choices would be the Taieri or Mataura as I have fished both in the past week and enjoyed them both. If it were possible, I would say the Taieri and Mataura.

The first day covers casting, flies and trout behaviour as well as suitable tactics for different waters. The second day is putting all the knowledge into practice on the river and hopefully catching a fish.

We start on the river by doing some casting practice and it is not unusual for fish to be caught while practising.

On Sunday there were several fish caught where the class practised, all on nymphs. There were quite a few mayfly spinners on the water, but only a couple of trout rose to them.

In the afternoon, we split into smaller groups each with an experienced fly-fisher to keep them on the right track. The fish were not as co-operative as they had been in the morning and very few were caught.

The day was very hot and the water warmed up noticeably, which could have accounted for the lack of fish.

The previous evening, I had fished in the same area and as the air cooled and the light faded, trout had moved into the shallows. No doubt Sunday evening would have been the same.

Early and late are the best times to fish when the water is warm.

My other outing was on the lower Taieri. The day was fine and warm with little wind and the water was much lower than when I fished it a week and a-half ago.

I was able to spot fish and to reach them, which was difficult when the water was higher. Not surprisingly, the trout were feeding on willow grub, or rather most of them, as I did see fish chasing inanga in the shallows at one point.

The willow-grubbing trout were cruising under the trees and rising making them easy to see.

If the trout could not be seen, it was a matter of covering the area around the rises until a fish was hooked or, as happened a few times, they stopped rising.

I also saw a couple of shoals of perch. I have seen more perch this year than in previous years and caught the odd one on a fly.