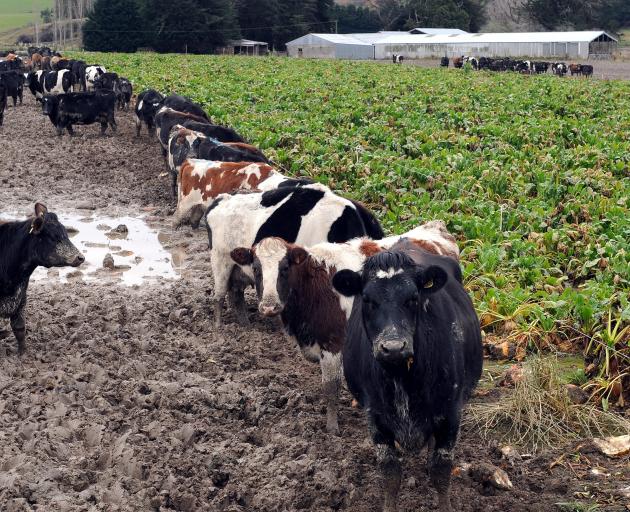 Cows in a wet paddock near Balclutha in 2014. PHOTO: CRAIG BAXTER
“Can I see a show of hands for who knows what intensive winter grazing is?”

Environmental activist and film-maker Geoff Reid refers to it as mud farming, and he thinks it is cruel.

In a presentation at the Environmental Defence Society annual conference in Christchurch yesterday, he showcased examples of bad practice in the South. Video showed runoff and sediment in Otago, Southland and Fiordland flowing into wetland, lakes and waterways, while cows trudged through thick mud and drank from their own waste-water.

“I hear a lot of talk about things getting better, but I don’t see it,’’ Mr Reid said.

It was a result of industry self-management and weak oversight, he said.

“This is our identity now. We can pretend it isn’t but this is what we are as a nation.”

Images from his trip to Southland in June sparked discussion during an Environment Southland meeting late that month after they were posted to social media.

Afterwards, deputy chairman Lloyd McCallum said his concern was that social media did not always provide the full picture, and photos could be misleading.

“It’s important that we as a council are careful in the way we respond to these things, as stories on social media can take on a life of their own relatively quickly,’’ he said after the June meeting.

“I would encourage anyone who sees something they’re concerned about environmentally to get in touch with Environment Southland directly.”

The June images had been taken after very bad weather.

Councillor Eric Roy had explained Southland farmers’ experience in 1972, after 10 days of that kind of weather.

‘‘Ten days when the best practice still ends up with things that aren’t pretty.’’

He told councillors that in that year, 13 Southland farmers committed suicide.

There was always a plethora of people posting to social media after a weather event and he was not sure how to handle that.

‘‘But that is the reality of farming in Southland.’’

A release from the council states it was granted with a suite of conditions to ensure the best outcomes for water quality.

Acting consents manager Bruce Halligan said the applicant was planning ahead and getting in early, despite the national rules for winter grazing being deferred until May 2022.

“We’ve had three consent applications in specifically for intensive winter grazing. It’s great to see farmers looking at their practices and the rules that apply and preparing for the future,” he said.