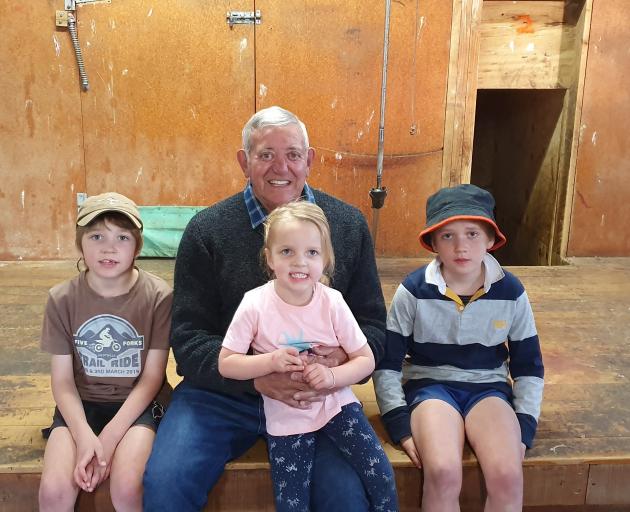 Retired shearing contractor Owen Rowland is looking forward to spending more time with family. He is pictured with grandchildren Brae (7), Greer (3) and Quin Rowland (10). PHOTO: SUPPLIED
Owen Rowland might have just celebrated his retirement after 50 years in the shearing shed — but he’s quick to point out he only did 49 on the handpiece.

Shearing is in the Rowland family blood. His father and uncle both shore their way into farm ownership, buying land at Enfield.

He can recall as a young fellow heading off to sit an exam at school.

"My uncle yelled out to not take too long so I could get back into the shearing shed, so I just went in, signed my name on the sheet and walked out again. And I have been shearing ever since."

In 1973 Mr Rowland (66) started a shearing run in sheds his father and uncle had retired from. He married Adrienne Greaney, who came from a family of shearers, joining forces with his brother-in-law and combining their two runs.

"In 1995 I had a really good shearer working on the run and it was actually he who suggested we move to contracting.

‘‘It took a little bit more organising but it meant we were able to make the business more profitable."

Mr Rowland was also farming 100 acres in Enfield "but the 1980s were tough with high interest rates and bad drought, so we decided to sell. ... we could actually be shearing for a profit instead of trying to keep the farm afloat."

A lot has changed over the years, as the price for wool dropped, the weight of the animal rose.

"That’s been the biggest curse really, particularly in the last five years. These days, it’s not unusual to be dragging out a 100kg crossbred ewe. Back in the ’70s, when farmers were getting paid an incentive to increase their ewe numbers, people were farming big numbers, and they were a lot smaller."

The Rowlands’ shearing crew consisted of eight or nine shearers who were mostly locals who lived in North Otago.

"We didn’t have a quarters so those that worked for us mostly lived locally, which worked well for us."

When he wasn’t shearing, Mr Rowland was a keen rugby player for Enfield Club. For a few seasons he represented North Otago which meant, between the two clubs, he would train or play seven days a week.

"Shearing was a great way of keeping pretty fit. There’s not too many occupations where you need to take a towel to work."

The profession also gave the couple the opportunity to travel. In 2009 and 2010, they lived in the UK for three months of the year where Mr Rowland would shear on his cousin Grant Rowland’s run "and we got a good look around the UK and Europe".

The beginning of the end for Mr Rowland’s shearing career was an unfortunate Achilles tendon injury, which he sustained while out riding his bike. He decided to call it a day last year.

The decision to sell the contracting business has been a welcome relief.

When Southern Rural Life spoke to Mr Rowland he had spent the past four days preparing a mai mai in anticipation of duck-shooting opening weekend. After that he intended to help out his son, Scott, and wife, Megan, who are dairy farming nearby and also planned to take regular trips to the North Island to see his daughter, Courtney, and her young family, as well visiting as his oldest daughter, Brooke, and her partner, who live in Christchurch.

It was also nice to enjoy weekends away to their caravan in Omarama "and come back on a Sunday not worrying about doing wages and making phone calls", he said.