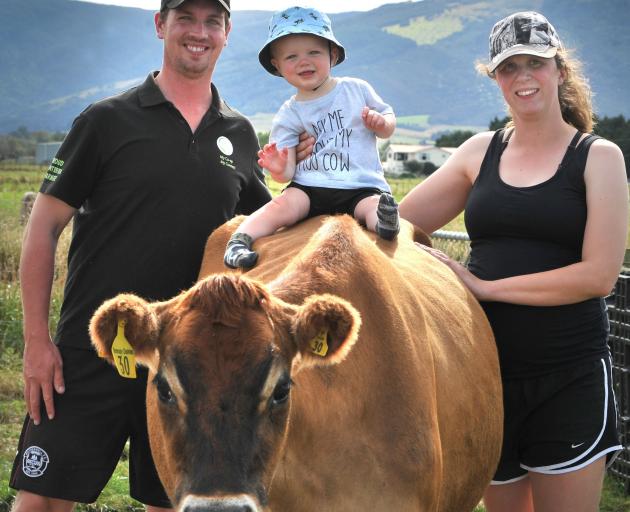 Gregor and Lynne Ramsay, with son George (1), hope entering the on-farm dairy heifer competition will ‘‘help our confidence that we doing an OK job of effectively growing our stock from weaning to calving”. PHOTOS: CHRISTINE O'CONNOR
It has been a year of baby and calf-raising for a Taieri Plains couple who are entering the up-coming combined South Otago, Tokomairiro & Otago-Taieri A&P societies’ on-farm dairy heifer competition.

First-time entrants Lynne and Gregor Ramsay’s stock skills will be put to the test in the competition, with the winners announced on April 9.

Mrs Ramsay (31) is from Glasgow and from a dairying background. Mr Ramsay (35) from Biggar, South Lanarkshire, also grew up rurally. They have lived in New Zealand as a couple for about six years.

After extensive experience in the agricultural sector, they decided to go share milking near Henley, and are in their second season. 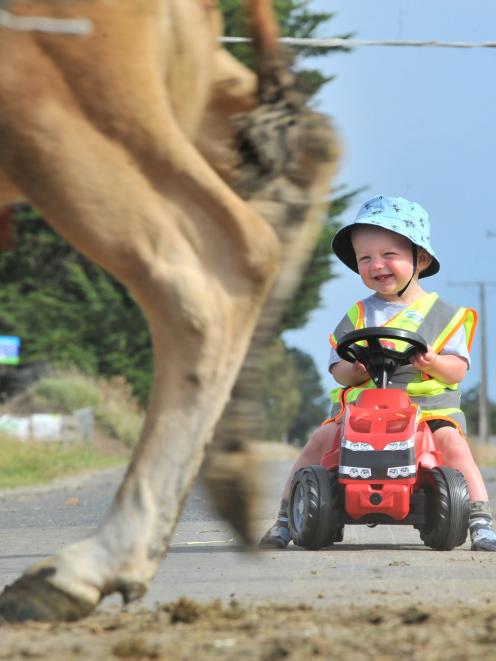 George Ramsay (1) is enjoying a rural Otago upbringing.
They met at a Young Farmers dance in Edinburgh in 2012. Mr Ramsay, who has a BSc (hons) Agriculture and Business Management had already spent time in New Zealand in 2010 on a working holiday.

"I worked on two different dairy farms here and really fell in love with the country. I returned home where I joined a dairy co-operative called First Milk as their milk supply manager for Scotland. I couldn’t put off my dream any longer."

He made the move back to New Zealand on January 1, 2015 and got a job as farm manager on a 250-cow farm at Tuatapere.

"I then took an opportunity to join Fonterra and became the area manager for Otago in December 2016."

The future Mrs Ramsay, who has a BSc (hons) in Agriculture, worked as a project manager for a recycling company spreading non-farm wastes to land across the United Kingdom for five years before following her husband to New Zealand in 2015.

"[Gregor] moving to the other side of the world didn’t even manage to get rid of me," she said.

Since then, she had had various jobs from herd manager to farm manager in Western Southland before moving to Balclutha to work as a meat inspector for AsureQuality at Silver Fern Farms’ Finegand plant for three seasons and then moving up to the Taieri to share-milk. 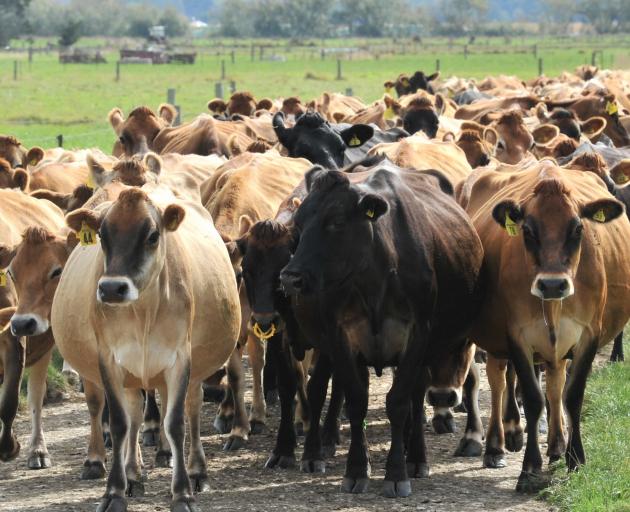 The Ramsays milk 140 Jersey cows near Henley.
They got married in August 2018 and had their first child, 1-year-old George during the Covid-19 Alert Level 4 Lockdown. He is going to be a big brother in July.

The couple are milking 140 Jersey cows on 40ha and also run the 20ha run-off where they graze their young stock, winter cows and make fodder supplement.

"This season it was a different challenge of trying to rear the calves and juggle having a [then] 4-month-old to entertain. Thank goodness for the Jolly Jumper in the calf shed," Mrs Ramsay said.

They felt that entering the competition would be a boost "to help our confidence that we doing an OK job of effectively growing our stock from weaning to calving".

"This is an area we have never had to worry about before but there are many people out there doing it in different ways so we are on a learning curve to find a style which suits us.

"We are also trying to decide in which direction to take our herd genetically so by growing our own stock and seeing them every day, we can decide which traits we like and can breed for."

Previously, Mrs Ramsay had helped some of their friends show their cattle at local shows in both South Otago and Scotland.

"Before M. Bovis and stock classes were cancelled I was brave and took my pet Belted Galloway cow called Gracie to Toko show. She got second in the beef section, but she’s always first in my eyes."

She had always entered the home industries section of the local shows in the district and been the secretary of Balclutha Football Club for a few years because "if you don’t enter and support these causes, they won’t be there for future generations to come, plus a bit of friendly competition of whose baking is better, pushes your skills and self-belief".

Being smaller scale, they felt extremely connected to their cows and land.

"We still have future ambitions to grow in size, and as Gregor has always said, ‘we plan to take over the world ... 140 cows at a time’.’’