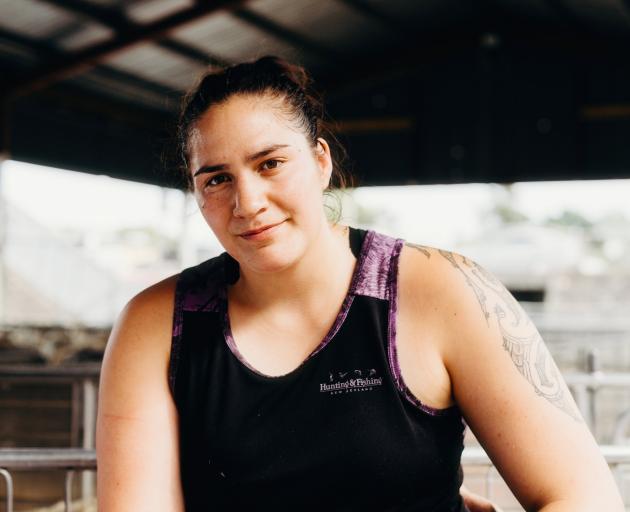 Alexandra woolhandler and shearer Pagan Karauria. PHOTO: REBECCA MCMILLAN
Central Otago's shearing industry will honour one of its own in a double-billing today.

Alexandra woolhandler and shearer Pagan Karauria will not only be recognised as a Master Woolhandler at the annual New Zealand Merino Championships, but will also feature in a film about the shearing industry being launched in Alexandra.

Karauria is profiled in the film She Shears, which is about five women working in the shearing industry. It will screen at the Otago Daily Times Theatre in the Central Stories Museum and Art Gallery this afternoon at 4pm.

She will be present for the screening and take part in a question and answer session afterwards.

Karauria's selection for the Master Woolhandler honour was decided by unanimous vote at the annual meeting of Shearing Sports New Zealand (SSNZ) in August.

Karauria would be following in the footsteps of her father and world-record breaker Dion Morrell, a Master Shearer, and her mother Tina Rimene, a Master Woolhandler, former world teams champion and three-times Golden Shears open woolhandling champion, a statement from SSNZ said.

Karauria won the inaugural Royal Easter Show woolhandling title in Auckland in April this year, and said she still had other goals.

They include aiming to qualify for one of the two places in the New Zealand woolhandling team for the World Championships in France next July. She just missed out in 2016, third to Joel Henare and Maryanne Baty, who went on to win the world teams' title in Invercargill the following February.

Karauria will compete in both the open woolhandling and the senior shearing at the 57th annual New Zealand Merino Championships, which is the first round of the PGG Wrightson national shearing circuit and will be held tomorrow and Saturday at Molyneux Stadium, in Alexandra.

Up to 200 shearers and woolhandlers from New Zealand, Australia and France will compete.