Chuffed to hand over wool reins 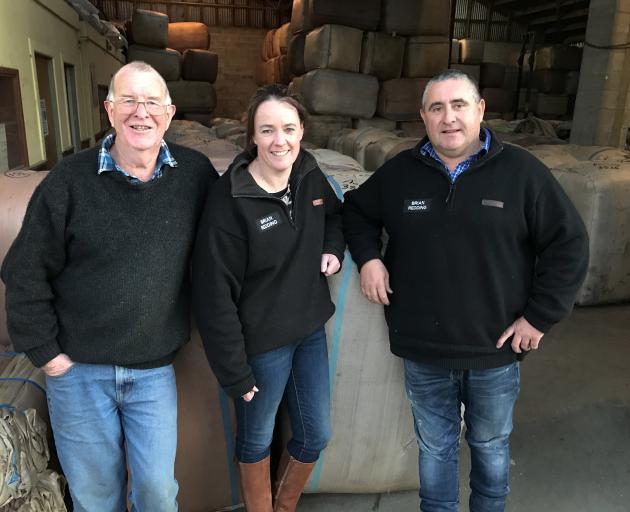 Jim Paterson (left), from wool buyer Brian Redding Ltd, and new owners Annie and Bede Chamberlain in the Gore store. PHOTO: JUDY MCKENZIE
Change is in the air at long-established wool business Brian Redding Ltd which has been operating in Gore since the early 1960s, as business and rural editor Sally Rae reports.

When it came to being in business, Jim Paterson’s parents gave him some good advice.

They drilled into him the importance of being "dead straight" in a community like Gore, saying reputation was everything.

And it was advice he heeded during more than four decades in the wool industry .

"It’s most important in a community like this, the trust really," he said.

Mr Paterson turned 68 last Tuesday, which also signalled the anniversary of his involvement in the industry. He started at Brian Redding Ltd more than 40 years ago and had remained there, eventually taking over sole ownership of what is now Gore’s only wool buying business.

But times were changing and he has sold the business to a local couple, Bede and Annie Chamberlain, who officially take over on July 1.

For Mr Paterson, it was a very happy result.

"From my point of view, I was probably staring down the barrel of closing the business."

And after all his years in the trade, that was not something that sat well with him.

"I didn’t fancy the idea, after all my years, of closing the doors."

Brought up a town boy in Gore, Mr Paterson "fell into" the wool industry by mistake but it turned out to suit him perfectly, he said.

He had been a university student for three years and, after a stint overseas, he got a part-time job at Brian Redding to fill in time before he returned to university.

He has been there ever since.

After four years, Mr Redding put him through Lincoln which gave him his wool background, something he did not have as he had gone in on the office side of the business.

The unusual thing about the company was while it was a private buyer, buying from farmers and then amalgamating the wool into saleable lots which were then generally bought by exporters, it also had a direct scouring exporting business with English company Bradford.

Over the decades, Mr Paterson had seen huge changes in the wool industry, including the plummeting numbers of New Zealand’s sheep flock and subsequent attrition in the wool sector.

In 2006, there were 90 private merchants in New Zealand and that had now halved.

Many businesses closed, rather than being sold, and it was "so lucky" Mr and Mrs Chamberlain came along, he said.

Coincidentally, his first job as a 15-year-old was being taken to a woolshed where Mrs Chamberlain’s father was shearing — he looked after the young Jim.

Land-use change in the area started about 1995 when a few North Islanders headed south to do some dairying.

The number of conversions every year thereafter made for a difficult time in the wool industry, which relied on high volume and very small margins. When volume dropped, it was untenable for some businesses, he said.

So asked how Brian Redding Ltd stayed in business, Mr Paterson said "hard work, like anything else".

Another factor was the overseas export connection which was an "extra string to our bow", as well as having low overheads. As an owner-operator, it did not have to support the corporate structure.

Being local also helped, as the business had great local support; in some instances now, Mr Paterson was dealing with the third generation of farmers.

Mr Paterson would remain part of the new company but did not have to take responsibility and quipped he would be able to sleep in on cold frosty mornings.

The timing was right for him to be easing out of the business, and Mr and Mrs Chamberlain were a very strong team, he said.

As far as the future of wool, Mr Paterson believed crossbred wool would "come again" but it was not going to be through carpet.

There was a lot of experimentation at the moment with development of new products, and that was where he saw the future.

He also hoped the new standard for wool established under the New Zealand Farm Assurance Programme would gain traction.

Wool quality had declined because of the introduction of composite breeds, and that had happened due to the dip in prices, which saw farmers turn their focus towards meat.

While Mr Paterson’s parents’ generation knew what wool was — because there were not really any other options — there was not that awareness now.

Campaign for Wool initiatives, such as the wool education containers visiting schools, were doing a good job.

However, his advice to farmers was "don’t hold your breath" — it would take time. While he did see good times in the future, they would not necessarily be back to the heady days of the early 1950s — but he hoped to see wool return to being a reasonable percentage of farmers’ incomes.

When it came to retirement, Mr Paterson was not yet too sure of what lay ahead. Last year’s Covid-19 lockdown gave him a "bit of a precursor of what it may be like", as his business was not considered an essential service.

"I found it took a little bit of fear of retirement away from me," he said.

Quipping that it was a little bit like losing a limb, given he had spent so much time doing the same thing, he added that it "couldn’t have worked out better".