Claim police raids 'over the top' 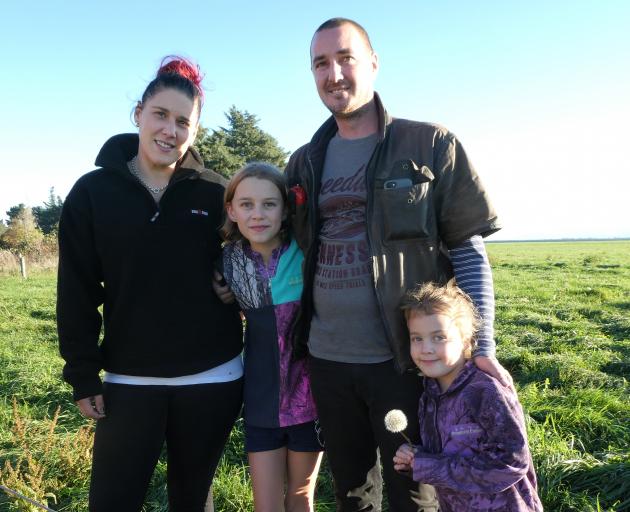 On Thursday, the subject of the latest of the "shocking'' raids was former Dunedin man Adam Mielnik (37), now a farm manager near Ashburton.

The raid is the second of its type to come to light recently, following a firearms seizure on a west Christchurch lifestyle block on April 2, reportedly involving 30 armed officers.

In the latest incident, father-of-two Adam Mielnik said he had returned to the family home for his regular noon lunch break with partner Tara, when "seven or eight'' police cars sped up his driveway and blocked potential exits.

His immediate shock was compounded when 14 police officers, more than half of whom were armed with semi-automatic rifles and side-arms, left the vehicles and spread out across his front yard.

A dog unit was also present, and backed up two plain-clothes detectives who approached his front door to speak to him.

Mr Mielnik, who manages 6000 cows on a dry-stock farm in Westerfield, about 20km outside Ashburton, said there had been no warning of the raid, which he described as "completely over the top''.

"Fortunately our two young children [5 and 11] were at school at the time, but you can imagine how traumatic it would have been if they'd been playing out front when all these armed police turn up.''

The detectives began by explaining the reason for the raid was Mr Mielnik's purchase of an AR-15 semi-automatic rifle from Gun City, the day after the Christchurch terror attacks in March.

After seeking his permission, they conducted an "intrusive'' search of his property, then asked him a series of "pointed'' questions.

"They were very interested in my views on the Christchurch shooting, Muslims, religion, and politics. I don't hold extreme views. To imagine I'm some sort of white supremacist is just a bit far-fetched.''

Following the interrogation, the detectives told Mr Mielnik they would need to confiscate his AR-15, worth about $2600, and $400 of accessories and ammunition.

"I wasn't best pleased to be honest. I'd only bought it on the spur of the moment as I was originally lined up to get one for my birthday for target-shooting, and just thought, `I'm never going to be able to get one now; better move quick','' Mr Mielnik said.

"Then when the ban came in a few days later, I tried to do the right thing and return it to Gun City to get my money back, but they weren't interested.''

Mr Mielnik said he understood the reasoning behind the rifle ban and seizure, but not why he was targeted in such a heavy-handed manner.

"I'd like to know how I came to be on a list somewhere. I'm just an everyday Kiwi. A phone call would have worked just as well.''

Contacted by the ODT, police said they could not give details about the number of similar raids that had occurred since the March 15 attacks for "operational reasons''.

Although they would not comment on Mr Mielnik's experience, they said ``many individuals'' had been spoken to as a result of inquiries following the attacks, and "interventions'' including arrests had ensued ``in a few instances''.

"That is normal policing ... Anyone is welcome to make a complaint if they believe police have done something wrong ...''

Mr Mielnik said he did not plan to lodge a complaint, although he and his family had been left "unsettled'' by the incident.

"It doesn't seem right they can treat people like this. It's very worrying.''

March 15: Police launch Operation Whakahaumanu to ‘‘reassure New Zealanders of their safety’’. Strategies include increases in armed police presence, and intelligence­led targeting of persons of interest.

March 22: Mr Mielnik attempts unsuccessfully to return his rifle and recoup his outlay.

April 2: As many as 30 armed police raid a west Christchurch lifestyle block and seize 11 firearms.

It is. A few things.

The children were not at home, unlike the Tuhoe raids some years ago.

While having every right to object, Mr Mielnik is concerned about police attitude, in an attendance that, comparatively speaking, was not unduly heavy handed.

Police should indicate for how long the apparent 'terrorist alert' is to continue.

Because police do not comment on routine policing, the reasons for the attendance are unknown.

Are 'ordinary kiwis' becoming anti police because of these incidents? Police are the bulwark against crime, and, in present circumstances, potential terrorist activity.
The Mielnik property was not the place to find it, but this is no reason for anti police sentiment generally.

The best time to introduce unpopular laws or suppress freedom, is during a crisis.

So you support the laws that allowed that Aussie coward to murder Kiwis then?

When I was growing up, we were taught to respect police, they were there to help us.
Now it seems the police do not deserve that respect, this was a heavy handed raid that totally didn't need to happen, it seems that the police attitude is that they can do as they like, such as incidents like this, the 'cop' who harassed a businessman for two years etc etc.
Mr Mielnik should lodge a complaint, the cops will find in their favor of course but it's the principle of the thing.
"Contacted by the ODT, police said they could not give details about the number of similar raids that had occurred since the March 15 attacks for "operational reasons'', yeah right, they stuffed up in this instance and don't want to say anything.

Come on lets get real here. On the 15th of March 50 people are shot and killed with semi and automatic guns. On the 16th of March a young man buys a semi automatic rifle at a gun shop. What was he thinking? Not much really and how tasteless to buy a gun the day after a mass shooting. Of course the police are going to raid his home. The only surprising thing is why did they not do it sooner. And why did he not go to the police and hand in his gun? I am with the police on this one. They have sworn to protect and serve and I am glad they are doing this.

Well said.
What an idiot for buying such a weapon at that time.
While the police were there in numbers, with some of them armed, who can blame them.
It doesn't sound like they were heavy handed all. Given the timing of the purchase, they clearly decided to err on the side of caution.
I for one am sick of the police being condemned for doing their job. This whole situation could have been easily avoided.

Maggie. it's quite likely this guy saw the writing on the wall the night of this tragedy. He may have known semi-automatics were likely to be banned soon after.
But lets be clear, buying a semi-automatic was not illegal on May 16th. He had every right to purchase one.
The scary thought here is the police using a tragedy as a tool to confiscate weapons that were legal to buy.

Snozz, just because it wasn't illegal, doesn't mean it isn't a clear indication of someone with serious issues, and someone without any morality or compassion. Do they wait for these people to start shooting. Even if these weapons were legal to buy, it was obvious to every sane person that that fact was in a problem.

Read for comprehension.
"Then when the ban came in a few days later, I tried to do the right thing and return it to Gun City to get my money back, but they weren't interested.''.
How do you know the guy wasn't going to hand it in, fair enough he tried to get his money back, the next logical choice is to hand it into the police.

Seriously, if your response to the terrorist attack was to purchase an AR15 then you get no sympathy at all, and just because you don't call yourself a Pink Supremacist is no proof that you aren't one.
You need an AR15 for target shooting like you need an Abrahams Tank to drive to your mail box. Learn how to shoot properly and you only need one shot.
The children weren't at home, so why even mention it, trying to gain sympathy when none is deserved. I don't blame the police for taking someone like this, with an assault weapon like that, seriously, they are entitled to be safe in their work.

Gun owners make up less than five per cent of the population. Why should anyone care what they think, or about how they are treated?

Since when does anyone stop and actually think through issues from a minorities point of view?