Murray and Julie Hellewell and daughter McKenna (2) inspect their farm’s Perendale lamb fleece that is used for the couple’s West Ridge jersey venture. Photo: Paula Williams
Two years ago, Lawrence farmers Julie and Murray Hellewell decided to seize the day and find their own answer to the dire state of New Zealand's strong wool industry.

''We just got sick of seeing people not wearing wool. Everyone is going on about doing something about the state of the wool industry but no-one ever actually does anything. We just decided we might as well have a go ourselves,'' Mr Hellewell said.

The Hellewells teamed up with wool buyer John Milne of Balclutha's Ken Milne Wools to establish contacts in the wool sector. All of the fleece is from the Hellewell's Perendale lamb flock; at 30 microns, the lamb fleece is used for the outer shell of the jersey and lined inside with New Zealand merino wool which is supplied through the knitwear factory.

''We wanted to completely get away from using synthetic fibres. And we've made it our mission to produce a jersey that is completely made in New Zealand and at an affordable price.''

Once the lambs are shorn, the fleece is sent to Timaru to be scoured of all its natural oils, and then goes on to Wellington to be spun and dyed. The finished wool is then sent to Dunedin to be knitted into the jerseys by the team at Otago Knitwear. 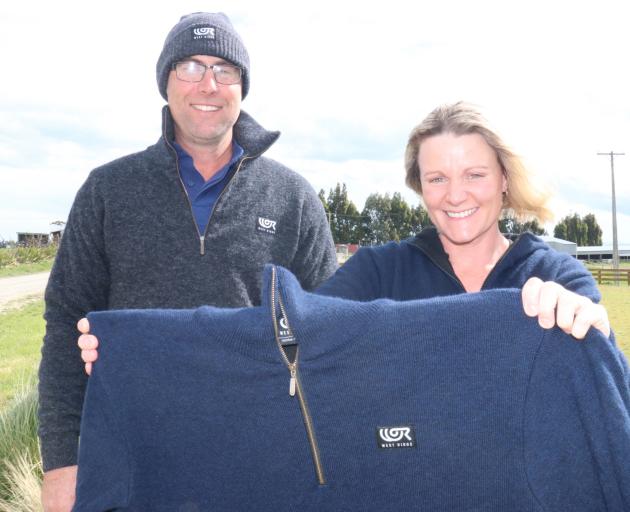 Murray and Julie Hellewell have launched West Ridge woollen jerseys, made in New Zealand from their farm's Perendale lamb fleece and lined with merino wool. Photos: Jack Conroy
The jersey company, simply called West Ridge, named after the Hellewell's farm, is still very much in its early stages, Mr Hellewell said. ''It has been a matter of trial and error, working out what works and what doesn't.''

He said the couple worked on different styles with the team at Otago Knitwear before deciding on the right ones. ''I'm no expert at textile design,'' Mr Hellewell laughed.

''Julie has pretty good sense of style and knows what she likes to put the kids in, so the decisions were pretty easy based on what we knew we liked.''

Mr Hellewell said the finished product is two styles of jersey; one with a collar and the other a hood. Sizes start from child's size 5 and go right up to adult sizes.

The West Ridge jersey is currently being trialled as a high visibility essential for the staff at Waipori Station.

Mr Hellewell said health and safety wear in New Zealand is virtually all made up of synthetic fibres, which he says has opened an opportunity to bring in a woollen high vis alternative. 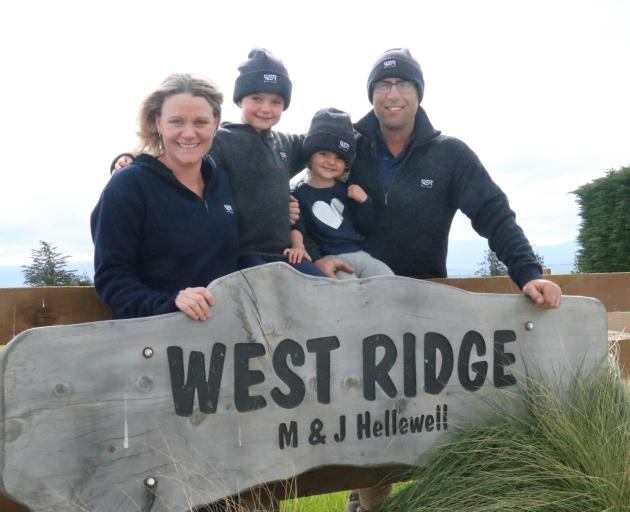 Murray and Julie Hellewell with son Riley (5) and daughter McKenna (2).
''We dyed the wool bright orange and sent it to Dunedin to be made. So far we've had positive feedback.''

The Hellewells have also recently secured the apparel contract to supply competitors and judges at the New Zealand sheep dog trial Championships, which are being held in Waikaka next year.

Competitors and judges will get the opportunity to purchase the jersey with the championships embroidered on the chest.

The venture has been an added thread of workload for the couple, also raising their young family and running a farm of 4000 ewes and beef cattle too. But Mr Hellewell said it had been a project well worth doing.

''It's been a really enjoyable process to be honest. It's been great to keep the old mind ticking over with a new challenge.

''There seems to be a lot of negative press out there these days in the farming sector, it's important to get the positive stories out there, too.

''Not many of us are very good at this self promotion stuff, but we need to get better at it, for the sake of our industry,'' he said.