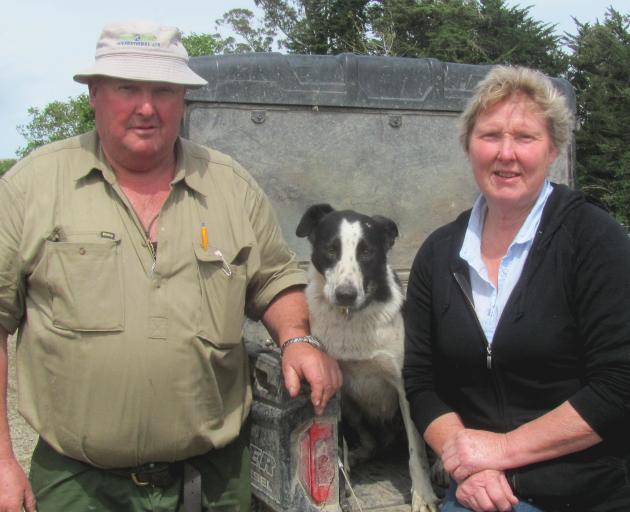 Days after the show, the Coplands were still coming to terms with their win up against other pedigree nominees, many of whom were also multi-generational farmers.

“It’s a pat on the back in general terms, an honour,” Mr Copland said.

“Why they’ve picked us is hard to believe. There are some esteemed people there,” he says, pointing to the other names on the silver tray they were awarded.

“But we do pride ourselves on what we’ve tried to do. We have been seen to achieve at a high level ... It’s a humbling victory.”

As part of the win they also received a $3000 travel voucher to go towards attending an overseas show but are yet to decide on where to go.

But the win is not just about their flock, nor is it just about how their sheep performed in show; although they did win five out of six interbreed competitions, and earned the Supreme Sheep in Show title.

It’s also about them and their significant contribution to the agricultural show over the years.

The Coplands have been consistent prize winners at the show in the breed and interbreed classes, and Mr Copland also serves as a sheep breed captain and is a well-respected judge.

The stud farm’s past wins at the show include Champion and Supreme Champion Ram in 2017.

Mr Copland is a third-generation stud sheep breeder and he and his family operate Westmere Farming Company, at Dromore, just north of Ashburton.

He and his wife (both 61) have been at the forefront of breeding development, in a constant bid to improve genetics on the Border Leicester stud started by Mr Copland’s grandfather, Henry, more than 85 years ago, and continued by his father, Derek.

Mark Copland says their Border Leicester ram stud sells about 40 to 50 rams in a good year.

The breed is dual purpose , its wool in demand for carpets and a good meat sheep in its own right. However, they are often crossed with Romneys or merinos to breed a sheep for meat.

The Coplands run Romney and Border Romney flocks in their commercial operation.

The farm is now run with help from eldest son Hugh, who returned to the farm from the corporate banking world after the death of younger brother Todd two and a-half years ago.

They also employ a farm worker and have two casual workers.

Son Kent, a structural engineer in Christchurch, also helps out some weekends.

Of their three sons, Todd showed the most interest in the sheep stud.

However, when he was diagnosed with cancer it started a roller-coaster journey that included chemotherapy, radiation, a further cancer diagnosis and a stroke. He died at the age of 31.

The Coplands’ grief is still evident.

But with the help of Hugh on farm, and now with five grandchildren aged from 10 months old through to 6 years, they carry on.

They run a Border Leicester stud of 200 ewes on their 670ha property.

The commercial sheep flock is made up of 2300 Romney and border Romney crossbreeds.

They winter and finish about 1000 beef cattle a year

and grow some barley, peas and potatoes on a share-farm basis, as well as fodder beet for the wintering cattle.

Mrs Copland is secretary of the Methven Collie Club, as well as time-keeper.

‘‘It’s an enjoyment ... a release. You’re with like-minded people for a day, or half a day, and you socialise with them,’’ Mr Copland said.

‘‘It’s a great leveller — you can be at the top today and tomorrow at the bottom.’’

Dog trials have taken the Coplands to many rural locations both around the district and beyond.

‘‘It’s a great way to see the country. You get to go up people’s driveways you wouldn’t otherwise be invited to and see how other people farm.’’

They have also been to Australia five times with the New Zealand team, competing in the Trans-Tasman Weyleggo Cup, the other four times being New Zealand.