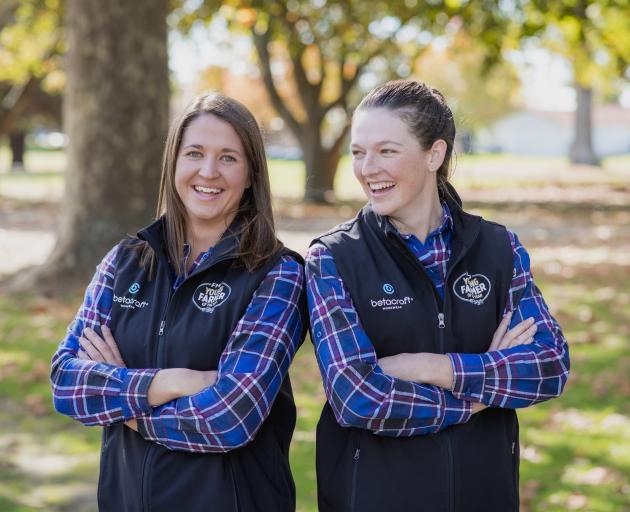 Georgie Lindsay (left), from North Canterbury, and Emma Dangen (Te Awamutu) who are competing in the grand final of the Young Farmer of the Year contest in Hawkes Bay in July. PHOTO: NEW ZEALAND YOUNG FARMERS
As Georgie Lindsay prepares for the grand final of the FMG Young Farmer Contest in July, she admits it had been an exciting yet unplanned journey.

Ms Lindsay (24) has been working as a shepherd in North Canterbury. When she "tagged along" with a couple of members of her local Young Farmers Club who were competing in the district final, she never dreamed she would reach the pinnacle of the event.

In the past, she had been playing a lot of sport and she never had a spare weekend to have a crack at the competition. This year was the first time that she could do it justice and she decided to give it a go.

Brought up on a sheep, beef and deer farm at Dipton, in central Southland, Ms Lindsay concentrated more on playing sport than farming when she was growing up. It was not until she was at Lincoln University that she decided it was what she wanted to pursue.

After completing an agricultural science degree, with honours, she worked as a consultant in the Manawatu but missed farm life.

After some travelling and casual work, she landed a full-time job as a shepherd on Marble Point Station.

The 2400ha property between Hanmer Springs and Culverden, which runs 3600 Corriedale ewes and 380 Angus breeding cows, plus replacement stock, was a "pretty stunning" place to work, she said.

She left the job several weeks ago and was doing casual work while trying to do as much study as possible.

She entered the contest to learn and grow her skills and whatever else happened would "be a bonus", she said.

She laughed that she had "plenty of weaknesses" to work on, quipping that she was endeavouring to channel stress into excitement, and accept that she could not learn everything.

But there were also so many experts in their respective fields that were willing to help out as she prepared for the event.

One example was the local shearing contractor, who used to be a butcher, whom she had asked to show her how to bone out a leg of lamb.

Asked what it was like to win the Tasman regional final, Ms Lindsay said "shocking" was probably the best word to describe it. "It was not part of the grand plan but it was awesome."

History was being made in this year's event; not only was Ms Lindsay the first female grand finalist to represent Tasman, but it was the first time in the contest's 51-year history that there were two women among the seven finalists.

Emma Dangen (24), a Te Awamutu veterinarian, was representing Waikato-Bay of Plenty and the two women got on very well, Ms Lindsay said.

She was keen to encourage other young people to enter the contest, irrespective of gender, backgrounds or experience.

The contest had been full of learning experiences for her, whether that was learning how to weld, gain confidence using a chainsaw, fencing, or even identifying different types of cheese.

Her family was heading to Hawke's Bay to support her in the grand final - tickets to the award show and quiz have already sold out - and it would be great to have them there, she said.

Ms Lindsay was unsure of her future plans at this stage, saying she was "open to ideas". She still had her five working dogs - she recently took up dog trialling and competed in her first event at Waiau - and loved being on-farm, but she did miss some mental stimulation.

She was a member of Amuri Basin Young Farmers and while it was a reasonably small club, she had enjoyed the social aspect. She first joined Young Farmers when she was at Lincoln and it was a good way to meet people.

"My job [at Marble Point] was probably 90% of the time by myself at work and living at home by myself. Young Farmers was pretty important socially," she said.

The contest begins on July 4 with an opening ceremony and parade at the Napier Sound Shell. It will be followed by a gruelling practical day at the Hawke's Bay showgrounds which will be a showcase of technology, food and innovation.

The event will take place alongside grand finals for the AgriKidsNZ and FMG Junior Young Farmer of the Year competitions which will involve almost 100 pupils from across the country.

The winner will be announced on July 6 after a 600-strong crowd pack the Rodney Green Centennial Events Centre for an evening show and fast-paced agri-knowledge quiz hosted by Te Radar.

Otago Southland is represented by Matt McRae while Alan Harvey, of Oamaru, is the Aorangi grand finalist. 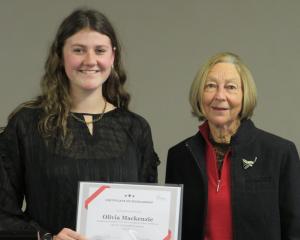 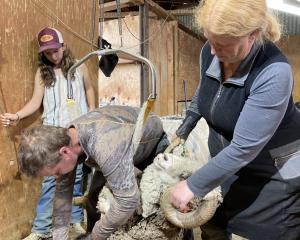